This week we look at a postcard, taken by Ernest de Tourret, that captures the demise of the S. S. Muritai on the rocks of Big Chicken Island on the 27 May 1908 (2019/43/10). The stern of the ship looks perilously low in the water and this photograph captures the slow dissent of the steamer to the sea floor. The extent of the damage was not fully realised at the time, due to heavy fog and the relative gentleness of the collision. Although the ship had been repaired from other incidents in 1888 and 1892, it was not recoverable from this situation.

The Muritai, formerly known as the Bellinger, was a well-travelled ship. She was built in 1884 in Scotland but serviced routes in the Sydney Harbour, on the South-East Coast of Australia and crossing the Bass Straight to Tasmania. In Australia, the Bellinger was predominantly a trading ship, although passengers were also taken on those trade routes. In 1897 she was sold to The Northern Steam Ship Company. It was in this transaction that her name changed - she was re-named Muritai. Muritai in te reo Māori means sea breeze and is also the name given to the introduced Norway Rat. In the 1890’s the Northern Steam Ship Company started giving its vessels Māori names.

On 27 May 1908 the steamer was travelling from Russell to Auckland with passengers and cargo.  Captain Hopkins had handed over to the Second in Command, W. Allen, at midnight. It was a calm night, but a thick fog settled over a few hours later. Unfortunately, the captain was called upon too late to avoid the rocks.  Fortunately, no lives were lost. All passengers and crew were able to evacuate, crossing a ladder to make it to shore. There was even enough time to retrieve much of the cargo (and to take a photograph). This was achieved due to a last-minute directional change which shifted the contact point on the hull. If this change had not been made the ship would have sunk within 10 seconds. It was uncertain when their rescue would arrive, due to the conditions, so they set up a make-shift camp on a sheltered beach using gear from the ship. Conditions became favorable and the Coromandel came to assist. Passengers were in Auckland by the evening.

In the case of S. S. Muritai, the fault lay with the compass. It was a maritime accident and so does not have the significance of the other wrecks such as the Niagara and the Puiri. These two ships have a strong presence in our local history due to the larger stories they are a part of. These shipwrecks are nationally significant due to their WWII associations. We have a display cabinet in the Exhibition Hall dedicated to the Niagara and the Puriri has a memorial at Ocean Beach dedicated to those lives lost.

In my research I came across another notable connection. The Muritai had been to the Hen and Chickens before but under very different circumstances. In 1903, The Muritai made a Boxing Day fishing trip to the islands. Little did they know that this would be the site of its demise five years later.

In the formal enquiry following the accident, recommendations were made to erect a lighthouse at Bream Head and at Chicken and Hen Islands. Neither of these eventuated and so the impact remains with those personally involved in the incident. This postcard was sent from Ella to Miss Mary Hanlon. As a postcard, this photograph documents the event and acts to inform the receiver of this local news story. This postcard functions now, as it did when it was initially sent. The story holds interest for those with connections to Whangārei, but it is a story without national significance and so is not widely known about. This postcard informs its audience of a little-known event and brings awareness to the fate of the S. S. Muritai. We are fortunate to have it as a visual reminder of this local event. 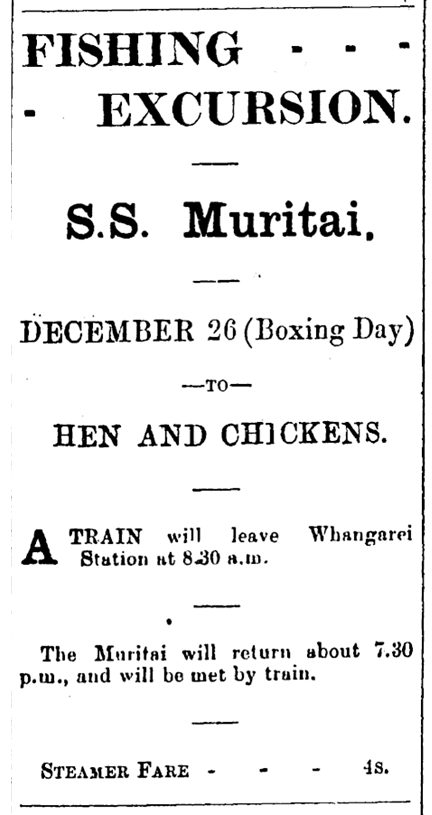