Whangarei Museum’s Collections store has many shelves of printers, cameras, projectors and photograph developing equipment. One item stood out as looking relatively modern, made of plastic and in bright colours. Today’s Our Treasures object is a mid-century photo printer made in the UK by Paterson Photographic Ltd. It is a perfect example of how much photographic technology has progressed within the digital space in the last 70 years, but also how passionate people keep making photos ‘the old-fashioned way’.

Paterson Photographic was started by Donald Paterson in the 1940s. Donald was trained as a Lawyer and a Dentist and practiced photography on the side. This spurred many photographic holidays to Kenya, where his sister lived. On one such trip Donald captured a snake eating a rabbit on film and had a moment of inspiration. Afterwards he developed an automatic loading film reel, utilizing metal ‘fangs’ to grip the film and help to smoothly load it into the small columnar tank. Donald patented his original design in 1948 and was one of his first products on the market, along with a developing tray. The automatic film reel has changed little to this day, although Paterson have since upgraded the ‘teeth’ into a twin ball ratchet system to load the film.

At first Paterson products were sold under R.F. Hunter of London, a well-known dealer of photography and projection equipment in the 1930s and 1940s. After around 20 years Paterson Products begin trading in its own name.

The Contact Printer shown here was advertised in 1954. Designed for amateur photographers of any age, this printer was designed to act as a compact darkroom.

In fantastic condition, our example comes intact with its instruction brochure and original red box. The brochure advertises mum, dad and son using home developing equipment then admiring the results in an album on the couch.

The body cavity contained a light bulb, hidden below the hinged sponge pressure plate. The walls of the body are made from yellow plastic so the printer would emit a soft yellow light to work in the dark room without damaging the printing process. For printing, a mask is first set on the printing plate to create a border around the print, then the home-made film negative is positioned, with a piece of contact paper on top.

The operator pushed the pressure plate down and then pressed the yellow plastic exposure bar (in front of the plate) to slowly open a shutter and allow white light to expose the paper through the negative. Other products were required to develop the print. First a wash through developer fluid brought the image out, then a quick rinse in water to be submerged in an acid fixer and, lastly, another water rinse and drying.

Sadly Donald Paterson died while trying to save a child from drowning at Inverness-shire, Scotland, in 1975. His legacy continues in his self-named business.

From its early days the company specialised in making equipment for amateur photographers such as tools for developing photographs at home. Despite huge changes in the photography business with coloured and digital photography and commercial production of prints, Paterson has survived by both adapting new products but also sticking to its core; a reliable source for passionate photographers keeping the tradition of dark room photo development going. Do you remember the days of 35mm film and those plastic film tanks rattling around in drawers? 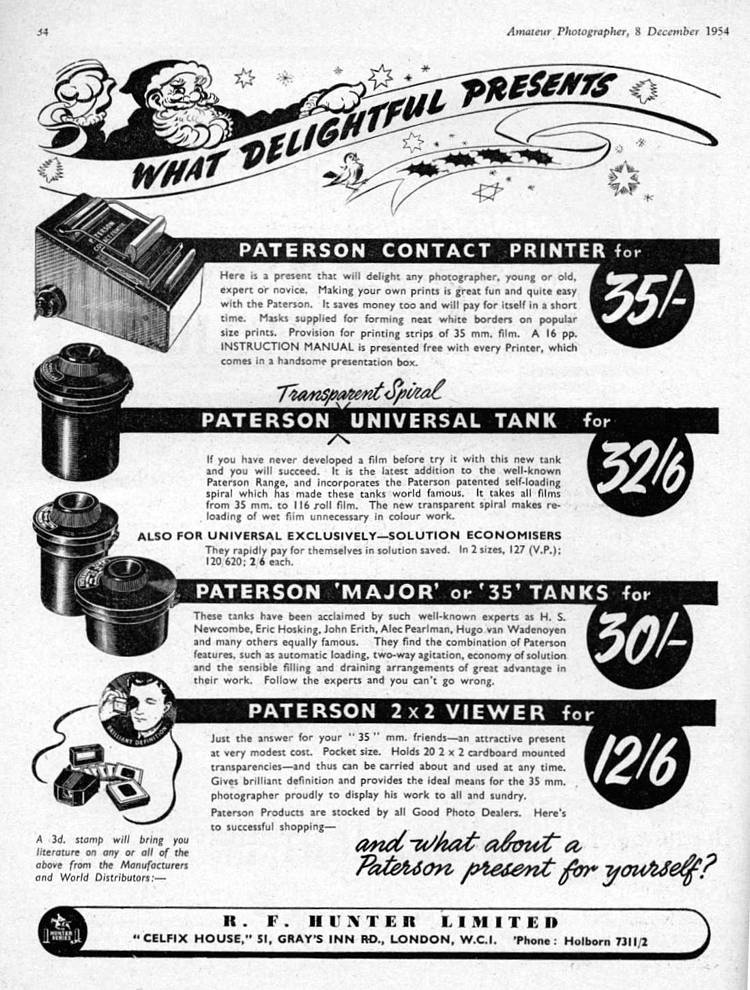