Some of the most exciting things we expect to see in museums are items from other cultures and distant lands. They help us connect to ancestors, discover new places and compare the behaviours that we all share despite these distances. Whangarei Museum cares for a collection of wooden clubs from across the Pacific Ocean. Their distinct forms show their diverse origins from the many cultures living in the Pacific Islands.

This week we share several Oceanic war clubs from the original Whangarei Borough Council Collection at Kiwi North. People have used clubs for many purposes in the Pacific- for ceremonies, as weapons, as spiritual idols, and often as all three. It is more common in some areas such as the highlands of Papua New Guinea for tribes to fight against each other using spears, shields and bow and arrows instead of clubs. Contrastingly, the club was the most prized weapon throughout Polynesia. Sadly we do not know much about the provenance of these wooden weapons but they likely date from the late Nineteenth to early Twentieth Centuries.

A large number of club shapes and styles can be seen in antiquity and contemporary arts. Variations are reflective of the many islands in the Pacific and the many tribal groups living on them, despite a shared heritage. The people in each area have developed their own artistic style, ceremonies and conflict methods. As intertribal war was a regular and important reality the art of fighting with clubs, spears and slings was taught from an early age and was developed by young men like a martial art.

The first example in our group (working left to right in the photo) is a Nggela style club named after its home island in the Solomon Islands. Nggela Islanders favoured paddle shaped wooden clubs. Our example is simply styled with a long, narrow blade and features a small ridge running from the pointed head. Its butt end is pointed with a simple ridge enabling its owner to stick it upright in the ground when not in use. Undyed fibre was mixed with black and red dyed pieces to create a binding of stripes and chevron patterns. These clubs are relatively commonplace, although many antiques have lost their binding.

Second is a distinctive Fijian sali club with a double curved head. A similar, but slightly smaller gata club has an angled cutting edge designed to snap bone. However due to the size, lighter wood and shape of the head on this example it is identified as the softer sali club used for ceremonial dancing. Fijians have the most diverse number of club styles anywhere in the Pacific Ocean due to a long history of warfare. Different club styles were handled differently by warriors, some were suitable for throwing, others for combat in forest, others for close killing and still others reserved as status items used for ceremonial dancing. Its body is made from lighter brown wood and the main surface is covered in large incised dots, infilled on one side with white lime and mid-blue pigment on the reverse. A knob at the butt end made it comfortable for handling and still shows the chisel marks from the craftsman.

Third is a stone headed club from New Britain with a pointed butt end. Two small shells are set into a black substance around the top of the stone. They contrast dramatically against the dark wood and stone. Clubs were often made from Pacific hard wood trees such as Kwila, palm, or ironwood and their colour deepened by submerging them in mud for a month after completion. New Britain stone headed clubs are unique in being bound by a compound rather than fibre lashings, as done elsewhere in Papua New Guinea. Composite clubs are made with ground stone or shell disks attached to the wooden poll. The heads come in many designs including disk, triangular, ball or pineapple shapes. Feathers, fibre, or shells were used to further decorate the handle lashings. Some islanders also used sharkskin as a grip on the handle.

Also from the Solomon Islands is a classic Alafolo Club, possibly from the Island of Malaita. Its heavy weight and dark colour suggest it is made from tooa, a local hard wood, or from imported laru (iron wood). Two noses or blades protruding from the head are its most characteristic features. A warrior’s grip was improved by fine incised patterns on the lower handle while more incising highlights the top, all filled in with white lime to contrast with the dark brown patina.

There is much literature around and many historic examples of Pacific war clubs that assist to grasp the depth of knowledge involved in such important cultural items. While we have just grazed the surface of a very complex and varied subject hopefully the diversity of our collections becomes more apparent and inspires further inquiry into the cultures of our Pacific neighbours. 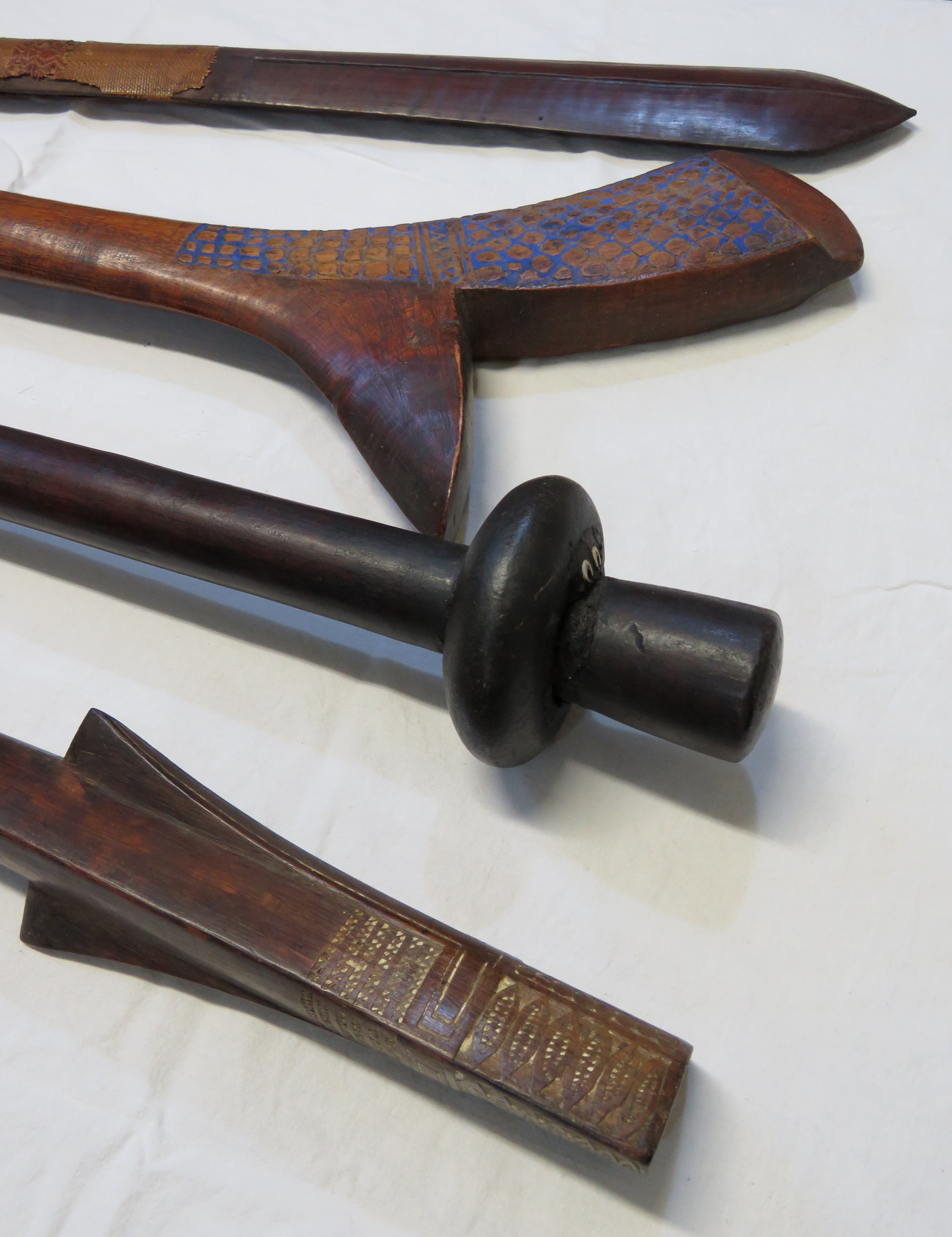