In the face of the amount of plastic we use these days people are turning back to materials commonly used in earlier times, such as glass, metal and ceramics. Whangarei Museum’s collection at Kiwi North includes hundreds of examples of early forms of packaging, especially bottles. Despite mostly being only of interest to bottle collectors, their many features actually can tell us fascinating stories about our past. Machine seals, makers marks and wear from use are particularly useful when analysing artefacts to discover their histories.

“Aerated Water and Cordial Manufacturers” was a common label on crates and bottles from the eighteenth to early twentieth centuries. While this label is quite alien, especially to young readers, this was the start of the cordial, soda water and soft drink products which line our supermarket shelves today. Soda water was first produced in the mid to late 1700s as one of the colourful and often dubious treatments offered by apothecaries for a variety of ailments. It was Schweppes company which transformed the use of soda water and turned the product into the international commercial success it is today. The main problem makers of soda water had was sealing bottles to keep the pressure in. One can imagine the many messy disasters that must have occurred before a gradual series of patented designs came out. Originally stoneware was most commonly used for aerated drinks but glass became more popular after the invention of a torpedo shaped bottle, which lay on its side so the liquid kept the cork moist and sealed. However, its tendency to roll off shelves did not make it a favourite with shop owners. Next, came several standing glass bottle designs which we identify soon.

In 2011, during the expansion of Spedding Road to State Highway 1, a dumped pile of bottles was uncovered and recorded by the monitoring archaeologist. These bottles were trademarked to “S. Hoey & Sons Kamo”, Whangarei’s first complete bottling company. Our first aerated water manufacturer was not a chemist, but an engineer. Samual Hoey, born in Belfast in 1843, travelled  in 1881 with his wife Jane and four children on the ship ‘Orient’ to Melbourne, then onwards to Gisborne, finally arriving in Whangarei in 1882. Soon they built a house and cordial factory on Vinegar Hill. The factory was imported from Barnett & Foster, London specialists in soda water machinery. The water quality, however, was poor in that location so they moved the entire premises down the hill to Kamo using bullocks and skids. Spring water was pumped and filtered before being passed through imported McEwen bottling equipment made, stated to be “capable of bottling forty dozen [bottles] per hour”.  The bottles used were glass ‘Codd bottles; a design patented in 1870s by Hiram Codd. The unique invention to solve the problem of containing high pressured bubbles was a marble which floated to the top and sealed the bottle opening. Indents in the glass at the bottle neck prevented the marble from sinking when the pressure was released and secondary grooves held the marble while the bottle was tipped to drink. This bottle design was internationally popular for several decades and Grey & Menzies, who bought Hoey & Sons in 1903, continued using Codd bottles to produce their aerated water products. Whangarei Museum has several examples of these as well as green glass Codd style bottles and a stoneware ginger beer bottle embossed with Reed Bros trademark. Reed Bros was a bottling and canning factory on Vinery Lane, near Whangarei’s centre city. Other bottles in Whangarei Museum’s collection belonging to local bottling businesses include a W. Simons crown top ( like a common beer bottle) glass soda bottle, and several stoneware drink crocks, labelled “W. A. Cole brewer of non-intoxicating beverages Whangarei” and “Rose Brand E. Mann Whangarei 1929”.

In New Zealand, glass bottles themselves had to be imported from overseas for over a century until national glass bottle production began in the 1920s. Often the bottle itself cost up to twice the cost of its contents to make. Company owners therefore trademarked individual bottles by stamping the glass with details like their name, logo and address.

Glass bottles were so valuable in the nineteenth and early twentieth centuries that a second hand bottle market developed. This is where the life histories of bottles, especially those discovered from archaeological sites become interesting, as they could be reused at home, and repurposed, returned to the original shop, or even sold to bottle merchants who cleaned and returned bottles to the original manufacturers or on-sold them to other companies for refilling. Back to the Spedding Road bottle dump, it appears that the embossed Hoey & Sons trademark rendered the bottles useless to new owners Grey & Menzies, so the bottles were dumped with their necks smashed.

We are now seeing bottle cleaning brushes and reusable glass or metal bottles coming back into fashion. It appears as people are becoming more aware of the impact of single-use packaging on the environment they are returning to their roots and rediscovering practical and cost effective practices of the past. 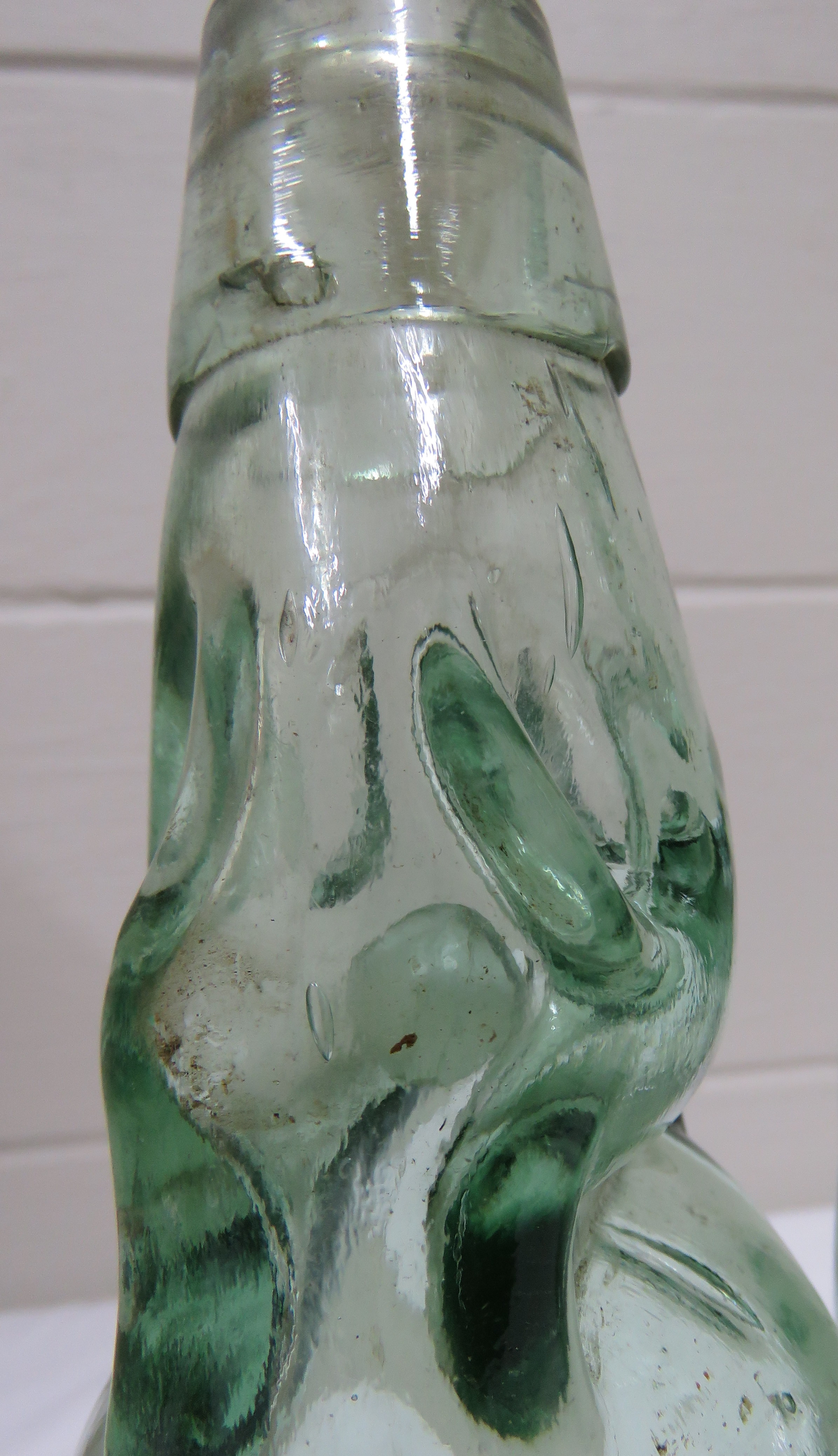