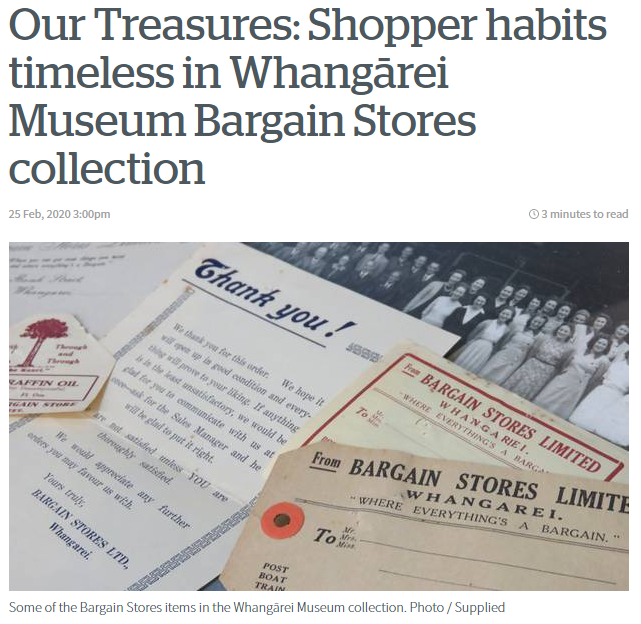 Looking at historic photos of Whangarei’s business centre you can see that shops have come and gone rather rapidly. Luckily, the collections of Whangarei Museum and other local archives preserve both photographic and artefactual clues of what was often a thriving shopping hub. Aside from the likes of Farmers Trading Store and Hallenstein Bros., which remain household names, many of the stores derived from local ingenuity. Some of the larger names from the early to mid-twentieth century which people will still remember are Drummonds, Crosby’s and Bargain Stores. Now, Bargain Stores knew what they were selling and who they were selling to. They certainly weren’t coy about marketing this fact. No matter what time, everyone loves a bargain. During the 1930s, this was more true than ever with the struggles of the Great Depression; penny saving, value, reductions and low prices became key slogans used by advertisers to attract flailing markets. Bargain Stores were Whangarei’s original Warehouse, coining the phrase “Where you can get most things you want and everything’s a bargain”, also shortened to “Where Everything’s a Bargain”.

A small group of archival records have been collected in Whangarei Museum from this shop. Several letter heads, stickers, invoices and labels from 1931 were donated together by Mrs. D. Gerard in 1988. These show the simple branding and confident slogan. On a couple of the documents there is also evidence of Northland pride- a kauri pictured next to the statement “Strength and Goodness Through and Through”.

Interestingly, the post labels give the options of “Post”, “Boat”, “Train” or “Bus” for the transport of goods. While the letterhead, post labels and invoice are blank, one label evidently comes off a bottle for “Pure Paraffin Oil”. Bargain Stores was a general merchants, selling everything either in store or through mail order. A framed photograph donated by T. Greenwood last year shows off the large staff force of 1947 below the exterior shop front which proclaims “The Store with 23 shops under one roof”.  Advertisements in the Northern Advocate newspaper further showcase their wide range of products including fabric, saddles, glassware and gramophones.

Next is a beautiful three-page book of N. Z. Cutters’ Academy patterns donated by L. Morris in 2010. The book advertises clothing patterns for elegant 1930s woollen dress suits which could be purchased from Bargain Stores, and is currently on display in Kiwi North’s Inside Out exhibition.  Bargain Stores originally graced Bank Street from around 1929 opposite the Bank of N. S. W., just North of Rust Street, then around 1930 moved three stores up where they remained until c. 1950. I Looking at these artefacts you can just start to get a feeling of what Whangarei used to be like and where we may be going in the future.