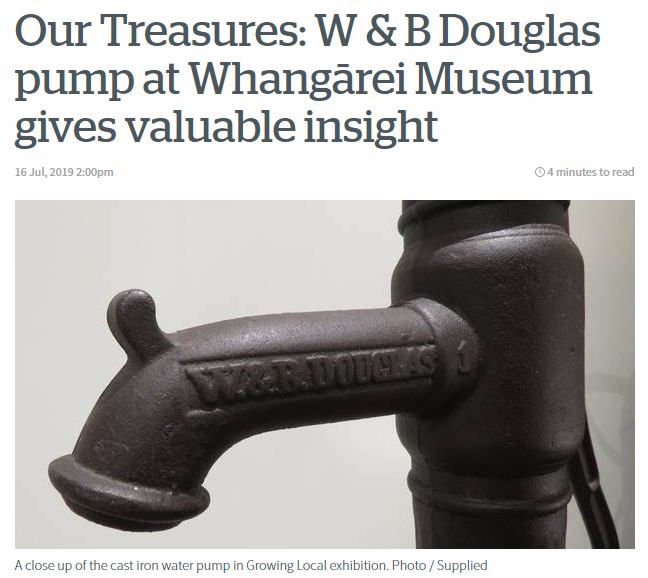 These days, when our houses are hooked up to mains water pipes or filtered fresh water tanks it is hard to imagine the hard work of Whangarei’s nineteenth century settlers in breaking new ground and transforming wilderness into European modelled households and farms. Of course, many locations around Whangarei had long been transformed for Māori settlements and cultivations, such as in the Pukenui hills and at Kamo, but a large amount of the land purchased by new settlers was unused and covered in shrub or swamp. At this time, common European tools for the house and the yard were either brought with families aboard ships or purchased from Auckland stores until general merchants set up in Whangarei in the 1860s. Often, the only way to purchase specialised equipment such as horticultural tools was through mail order or request to a local merchant.

When looking at historic artefacts, we are often lucky to find trademarks stamped or embossed on a part of the artefact. Sometimes the manufacturer remains hard to find but others, like W & B Douglas, were well known international brands with widely circulated catalogues.  The Whangarei Museum at Kiwi North is currently displaying a cast iron water pump (1970.9.15) in our latest exhibition ‘Growing Local’. Clearly embossed on the spout is the “W & B Douglas” trademark. This pump hails all the way from Connecticut, U. S. A.

The company W & B Douglas was founded in Middletown in 1839 by brothers William and Benjamin Douglas. Older brother William first founded company Guild & Douglas and made steam engines, and pumps, among other machinery. He joined his brother Benjamin as they both had foundry and machinery manufacture experience to start their own small pump and hydraulic ram business, W & B Douglas. At the late nineteenth century, the company had grown massively to become the largest and oldest pump manufacturers in America, with a factory in Connecticut covering three acres, with 200 staff, and warehouses in Chicago and New York.

Their success owed to their innovative products, which were shipped across the world and included hydraulic rams, hand powered fire engines and hydrants, lathes, cannons, and various pumps and their fixtures. William and Benjamin, aided by other members of their family, invented new equipment for which they filed 32 patents. The Douglas’s became a successful and influential family. Benjamin was a Lieutenant Governor of Connecticut during the civil war, became Mayor of Middletown from 1840 to 1855, and helped to elect Abraham Lincoln as President of the United States.

Whangarei Museum’s pump is a hand operated yard pump for lifting water from a deep well. The body is made from cast iron with brass parts such as a cylinder, piston valves, and bearings. Looking at their 1903 general catalogue it is not certain which model the pump is but it inscribed with “No. 1” and appears to be a Yard Lift Pump for drawing water from 8-12 m deep. The cylinder inside the main body would have been attached to a suction pipe and lower cylinder in the ground, covered by the flange (base plate). The pump was donated by a Mrs. McDonald as part of a collection of items from the Wakelin family home on Three Mile Bush Road. Thomas Wakelin and his wife Mary (nee Udy) were one of the first European families to settle in Kamo, Whangarei. After arriving in Whangarei in 1850, Thomas started Whangarei’s first butchers shop on Cameron Street. Exactly when and how Thomas Wakelin obtained this W & B Douglas well pump is unknown, but its preservation allows us insight into the corpus of once critical farm and home tools and the distances went to obtain them.