The Northern Advocate | The Humble Button 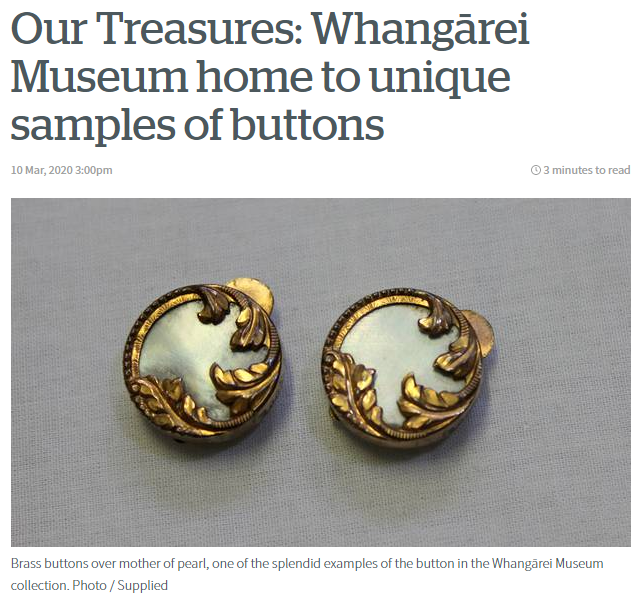 In 1852 the noted Victorian author Charles Dickens wrote an article about the button industry in Birmingham. He was fascinated by the methods used to produce buttons especially the skills that went into the making of the dies to punch out the designs. His article is available on the internet and makes for interesting reading.

The earliest buttons were used not only as fasteners but often as seals and have been found in the Indus Valley, 2800 – 2600 BC as well as Bronze Age sites in China, 1500 BC.  Functional buttons with buttonholes for fastening or closing garments appeared first in Germany in the 13th Century and soon became widespread in Europe.  As an aside since the 17th century buttons have been used to smuggle small items and during two World Wars military buttons were able to contain miniature compasses. Such ingenuity.

Buttons have been made in a great variety of materials and reflect the timeline of materials technology. Then as now there are three main sources of button making, those individually crafted or as a cottage industry or produced in high tech factories such as the one in Birmingham as noted by Charles Dickens. Today China produces 60% of the world’s buttons.

In 1918 the U.S. Government made an  extensive survey of the  international  button market which  listed buttons being made of vegetable ivory, metal, glass, galalith ( a plastic), silk, linen, cotton covered crocket, lead , snap  fasteners, enamel rubber , horn,  wood, bone, leather, paper, pressed cardboard, mother of pearl, celluloid, porcelain, zinc, stone, precious metals… the list  goes on. Even notable pottery firms such as Wedgewood and Moorcroft got in on the act and made china buttons.

Nowadays hard plastic, shell, metals and wood are the most common, the more exotic materials as listed above tend to turn up in private collections or museums. The Whangarei Museum holds some quite unique samples of buttons both in early catalogues and on cards as well as individual buttons. The card containing the crochet covered buttons would have been a sample card sent to tailors or seamtresses so that a customer could choose the appropriate buttons for the garment being made. These buttons were worked over a knob of cotton or silk called a form. This type of button was made from the 17th century onwards and would have been most likely a cottage industry, being made by hand. This card of samples is dated 1921 so it seems obvious that this style of fastening persisted.

The book of (vegetable) ivory button samples is dated 1912 and contains mostly fastenings for male clothing.

The small pair of buttons have a brass back with a shank that folds back so that they can be removed when the garment is washed. The pattern of leaves is over mother of pearl. The four large buttons are a splendid example of the die makers skill in crafting a tiny fuschia flower in the centre surrounded by a flower border of brilliant colours.

Let Charles Dickens have the last word, “It is wonderful is it not? that on that small pivot turns the fortune of such multitudes of men, women and children, in so many parts of the world, that such  industry, and so many fine faculties, should be brought out and exercised by so small a thing as the  Button.”