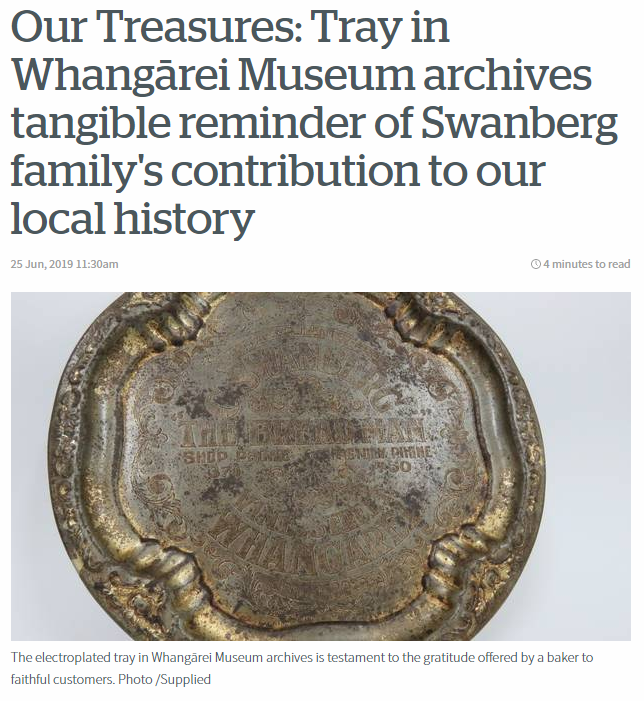 How often on a weekend is it the norm to call at the local Hot Bread shop or bakery to pick up a treat on the way home.  You can’t beat the smell of freshly baked bread as you enter the shop or the wafting aroma of pastries still cooking in the oven.

A century ago entering a bakery would’ve had similar effects on a customer’s senses and during Christmas of 1925 shoppers frequenting one bakery in Whangarei received a special treat of another kind.  Situated at the eastern end of Vine Street, was a well-known baker who had been in the trade for many years and over the festive season his bakery was offering patrons, along with their daily bread, a complimentary keepsake for their loyalty and custom.

The tarnished, electroplated tray held in Whangarei Museum, although no longer in pristine condition, is testament to the gratitude offered by a baker to faithful customers for their continued support.  It is engraved accordingly “With the Compliments from C. Swanberg, The Bread Man”, and would have been a welcome gift to shoppers. However, the Swanberg name and its association with freshly baked bread started long before these trays were touting the family name.

The family bakery was originally established by Charles’ father, Frans Oscar Swanberg who emigrated to New Zealand from Sweden in 1873.  Frans moved north shortly after and was living and working in Whangarei as a baker.  When he first opened for business his shop was prominently situated in Walton Street, the townships main thoroughfare.

Several years later in 1892 Frank took over the old ‘Mill Bakery’ but it wasn’t long before he was advertising as a ‘Bread and Biscuit Baker’ in Cameron Street.  In the meantime, his son Charles had established his own bakery at Whakapara.

Not only did the Swanberg’s provide locals with fresh bread from their retail outlets, they also provided catering for picnics, weddings, socials and concerts held in and around Whangarei.  Business must have been good as in 1899 Frank Swanberg advertised the opening of ‘Refreshment Rooms’ in Scott’s Building, Cameron Street in connection with his bakery business in the same street.  As a quality baker he also successfully secured the contract in 1906 for the daily bread supply during the encampment of the Marsden Mounted Rifles. 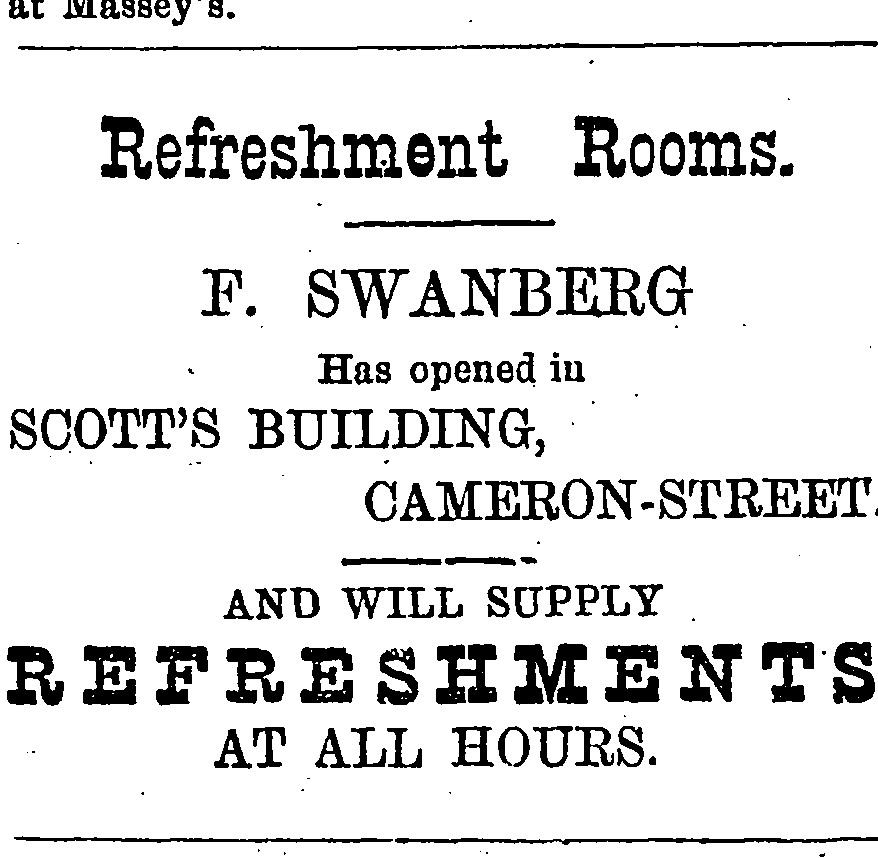 The premises of F O Swanberg’s bakery narrowly escaped destruction by fire on more than one occasion, in 1877 and again in 1899, but this did not deter the baker who after several decades in business was adjudged bankrupt, dying suddenly at his residence in 1913.

After his father’s death, Charles Swanberg took over Bannan’s ‘Crown Bakery’ in Water Street re-naming it the ‘Star Bakery’.  He advertised regularly not only his shop but also his factory bakehouse operating in Norfolk Street at the time.  Charles also purchased a couple of racehorses in the 1920’s and being inclined to bet on his own investments, it wasn’t long before the business was in decline.  By 1924 the bakehouse was for sale and the bakery had moved to the Vine Street premises where the Museum’s tray originated.

There were more troubles ahead for this local baker who was involved in several motoring accidents, one of which resulted in his out of control vehicle going through a large plate-glass shop window on Bank Street.  Further financial woes ensued for C Swanberg, Baker, again followed by bankruptcy in 1929.

Despite the upheavals encountered, this tray serves as a tangible reminder of the Swanberg family’s progressive contribution to the social history of Whangarei and of one of our earliest ‘Hot Bread’ shops.