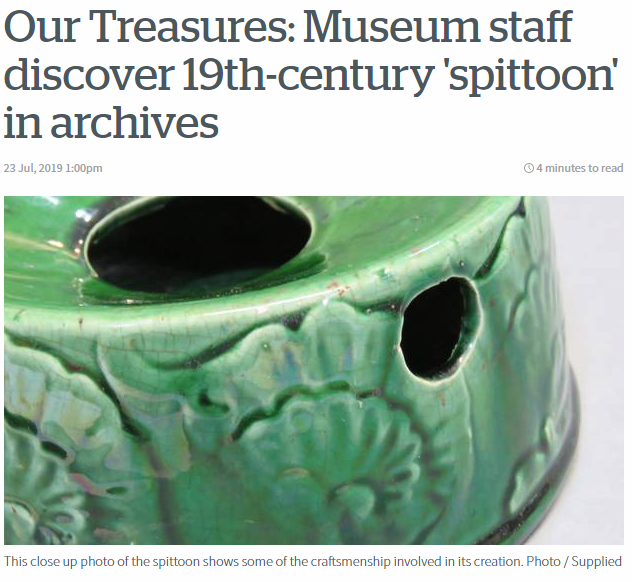 Disgusting, vile and revolting are words used to describe the act of spitting.

To refrain from spitting in public is a common courtesy in many areas of the world, but you’ll face a hefty fine and possibly even jail time if you are caught spitting in other countries where it is illegal.

Nowadays it's often seen as an action of anger and disrespect, but it hasn't always been the case.  In the past spitting was a socially acceptable habit in Europe.  Far from being frowned upon, spitting was even encouraged in etiquette manuals and receptacles to catch such expulsions were once commonplace.

It was only recently that Whangarei Museum staff came across one such container, bewildered as to its function or origin.  Located amongst an array of floral vases and urns, the brightly glazed, green stoneware vessel looked somewhat out of place, being much older than those surrounding it and of a very different shape.  After closer examination it was identified as a late 19th century “spittoon”, provenance unknown.

Often associated with chewing tobacco, these containers, also known as “cuspidors”, were prevalent from 1840 to 1918, though they’ve been in use in Asia for centuries.  Used for catching spittle, they could be found both inside and outside of public places and private homes.

Instead of smoking tobacco, many Victorians turned towards chewing tobacco which was sold in bricks or twists.  As a result of the growing number of people who chewed tobacco, spittoons or cuspidors became a common sight during the 19th century.  Once a fixture provided in hotel lobbies, railroad stations, banks, barber shops, business offices, court rooms, and saloons, they reflect the widespread tobacco habits of a previous era.

Spitting was an accepted practice, and the production and maintenance of spittoons were businesses in themselves. Spittoons proliferated and embodied every sort of design and material from the perfunctory to the bizarre, from the durable to the fragile. They came with a multitude of finishes too, from the brightly coloured Majolica glazes like that of the Museum’s spittoon, to the plain metal finish of mass-produced railway receptacles.

Designed with a low profile, spittoons were intended to sit on the floor and usually had a weighted base to avoid being accidentally kicked or tipped over, while cuspidors were often more erect. Some containers had a hole in the side for pouring out the accumulated spittle while others had the simple top opening for dispensing the vial and rank contents.

Chewing tobacco and the use of spittoons was not restricted to the male domain, who also carried personalised pocket receptacles or sputum cups, similar to small metal or glass flasks.  Victorian women, perceived as prim and proper were not excluded from this habit, also partaking of the noxious plant.  They would discretely expectorate the tobacco juice into a tastefully decorated, feminine 'ladies’ spittoon' produced commercially, which indicates there was more than a slight demand for such utensils.

There was a certain repugnance at the habit of public spitting so the use of spittoons and cuspidors was considered an advance in the control of this revolting custom.  After the 1918 flu epidemic, both hygiene and etiquette advocates began to disparage public use of the spittoon altogether.  Eventually deemed unsanitary the use of these receptacles had considerably declined by the end of the Edwardian era.

Vast numbers of old metal spittoons met their ends in the scrap drives of World War II while others no longer used for their original purpose, were utilized as flower vases, their low squat shape perfect for table centrepieces.  Perhaps that is why the Museum’s spittoon ended up where it did!