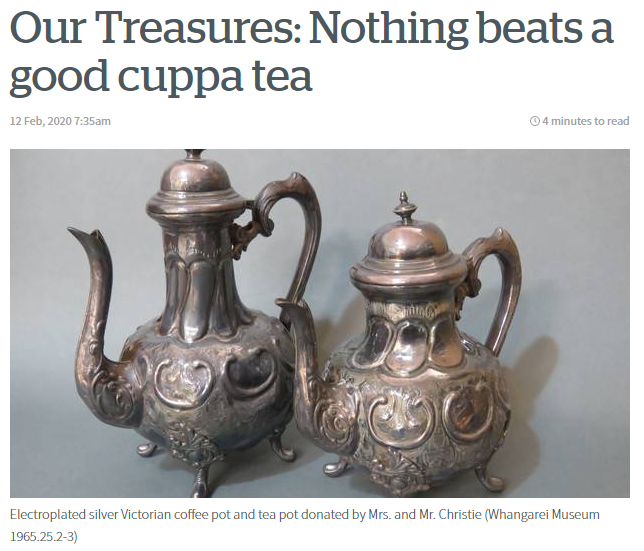 Despite New Zealand’s dominant coffee and espresso culture, in my opinion nothing beats a good cuppa tea brewed at home. While tea bags rule by convenience it is well worth the time to brew loose tea leaves in a proper tea pot. Part of the pleasure of this ritual is the actual service not just the resulting drink. Owners of antique tea and coffee pots likely fell in love with the appearance and history of their china or silverware. Their appreciation must grow upon discovering the excellence with which old spouts pour. I recently had the pleasure of serving tea and coffee from a set of George III silverware and was shocked at the jet of hot liquid that streamed out of the elegant spout, almost overshooting the cups.

Whangarei Museum’s collection has its share of silver and china service ware, both crude and delicate in style. Today we look at a pair of Victorian silver-plated pots, one for serving coffee and one for tea. The pair were donated by Mrs. And Mr. Christie of Whangarei in 1965. Mrs. Christie had received them from her grandmother Mrs. Tennant and estimated that her grandmother had owned them around 1895. While their ornate surfaces would have once been appeared to be burnished silver, the colour has since oxidised to a black tone. The lighter coloured interior makes it obvious that they are not silver pots at all. This colour feature is evident of an early form of electroplating- a method of making cheaper materials appear more expensive.

In this case, a base layer of white metal or nickel-silver, which has been coated in a thin layer of silver to imitate much more expensive sterling silver coffee and tea pots (made from at least 92.5% silver). Electroplating was invented in 1804 but only became commercially available in the 1840s when John Wright and his associates George and Henry Elkington of Birmingham improved the chemical process.

Sheffield Plate was an earlier form of silver plating that was invented in Sheffield in 1745. It involved the fusion silver and copper ingots by heat before they are rolled out to a flat sheet and made into a vessel or flatware. Comparatively electroplating was a faster and cheaper process, where the silver is placed into a slightly acidic bath and its particles are attracted onto the surface of the pre-made metal object suspended in the bath using an electrical current. The finished object is then washed and buffed. The development of electric generators in the late nineteenth century boosted the ability of this kind of plating to be used on larger machine and automobile parts.

The only trade marking on their bases claim “Warranted English electro-plated…9299”, which is quite different to the Hall Marks to be found on sterling silver pieces. The prices asked, the pride of silversmiths, and a silver tax introduced in 1784 all owe to the number of Hall Marks that feature on sterling silverware. A lion walking to the left, termed the Lion Passant, has been used by English silversmiths to certify that their wares are of certified sterling since 1719. Therefore silver plate wares can be identified by their lack of this mark and often by the lack of any other Hall Marks. Often plate ware is marked as EP- electroplated or EPNS- electroplated nickel silver.

The decoration of the coffee and tea pots is typical of the mid-late Victorian era, very ornate and flowery compared to their Georgian predecessors. Their surfaces are both decorated with a detailed engraved and pushed out foliate (leaf) design, and a lobed design wraps around their compressed necks. Their bulbous bases rest on scroll shaped feet.

Such ornately decorated, electroplate tea and coffee pots filled the gap in many homes of Victorian New Zealand where, like today, people wanted to have nice things, without necessarily spending a large amount. However, such trickery of technology involving electrical currents, silver and acid does not last the test of time and many silver plate vessels have been re-plated by now to replace the tarnished silver layer. So, does the extra work involved in polishing and maintaining your silverware improve your cuppa tea experience? I think so, but perhaps not every day!