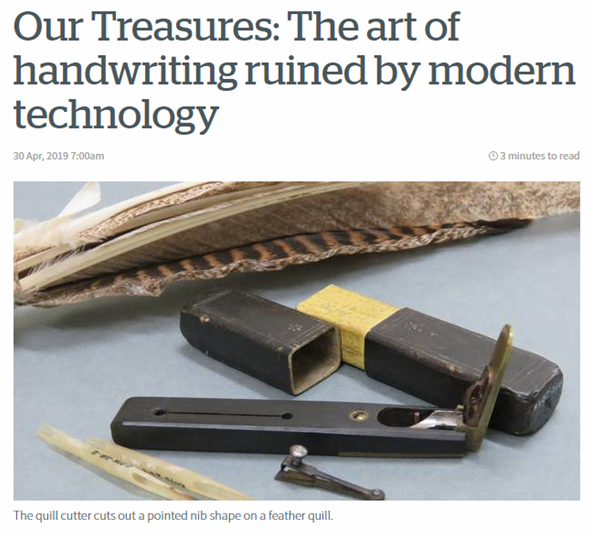 With technology today it is seldom that mail is delivered to our letter box, especially a handwritten letter from a friend, relative or personal acquaintance. Too much texting and computer typing has caused many people to neglect their penmanship.  The art of handwriting was once taken very seriously and was often seen as a daily ritual, whether through written thoughts in a private diary, daily scribes in a traveller’s journal or jottings from a ships log.

Technology seems to have ruined our collective handwriting ability. Dip pens, ink bottles, blotters and even more archaic, quilled pens, pen knives and travelling writing slopes have long been abandoned, yet all is not lost.  Housed in the archives of the Whangarei Museum in an amazing collection of these long-forgotten relics including the most wonderful piece of apparatus used at a time when such writings and paraphernalia were the norm.

Gifted to the Museum in 1970 by Mr W F Cross, this innately antiquated piece of writing equipment comes in the form of a Victorian, ebony and brass quill cutter housed in its original case.  Used in conjunction with quill pens made from flight feathers of large birds, these specialised instruments were indispensable in preparing the feather tips for writing centuries ago.

The device dated around 1880, cuts out a pointed nib shape on a feather quill while slitting it down the centre tine.  The hollow shaft of the feather acts as a reservoir holding the ink before allowing a steady flow to the nib by capillary action.  Also incorporated within the tool itself is tiny mechanism used for trimming and tidying the quill end. Although the quill cutter fashions the nib, a penknife is sometimes needed to further refine and perfect the tip.

Impressed are the instrument maker’s name and trademark symbols, revealing its manufacturing origin from the highly esteemed Sheffield Company of Joseph Rodgers & Sons.  Founded in 1724, this firm would always remain synonymous with the distinguished maker’s mark of the star and Maltese cross.  In 1821 the firm was appointed cutlers to the royal family for the first time and as such, Joseph Rodgers held great importance to the Sheffield cutlery industry and its fame around the world.

This burgeoning firm, initially established as penknife cutlers, expanded during the 1800’s when their product range broadened to include razors, table cutlery and scissors. Years later Rodgers produced and exhibited one of his most famous knives, the ‘Norfolk Knife’. Made for the Great Exhibition of 1851, it took two years to complete and features blades with etchings of Queen Victoria.

Around 1860, new and spectacular showrooms were built with people travelling from as far away as America and China to marvel at superb examples of Rodgers craftsmanship including King Edward VII and The Shah of Persia.

Whoever originally owned and used this Rodgers quill cutter certainly had distinguished taste and an affinity for quality craftsmanship.  The legibility of the owner’s hand would have been determined not only by their penmanship but by the cut of their quill and leaves us wondering what effect this piece of writing equipment may have had in stylising their handwritings.