Group rationing can be necessary in times of stress. We have experienced this lately with purchasing limits on certain items in supermarkets, such as milk and bread. Even without government instructed rationing, people worldwide are likely being much more conservative about their consumption of everyday products at home, whether as a result of penny pinching, reducing outings or of restricted supply. Compared to New Zealanders’ experiences during World War Two, our recent shared supply difficulties appear less severe. 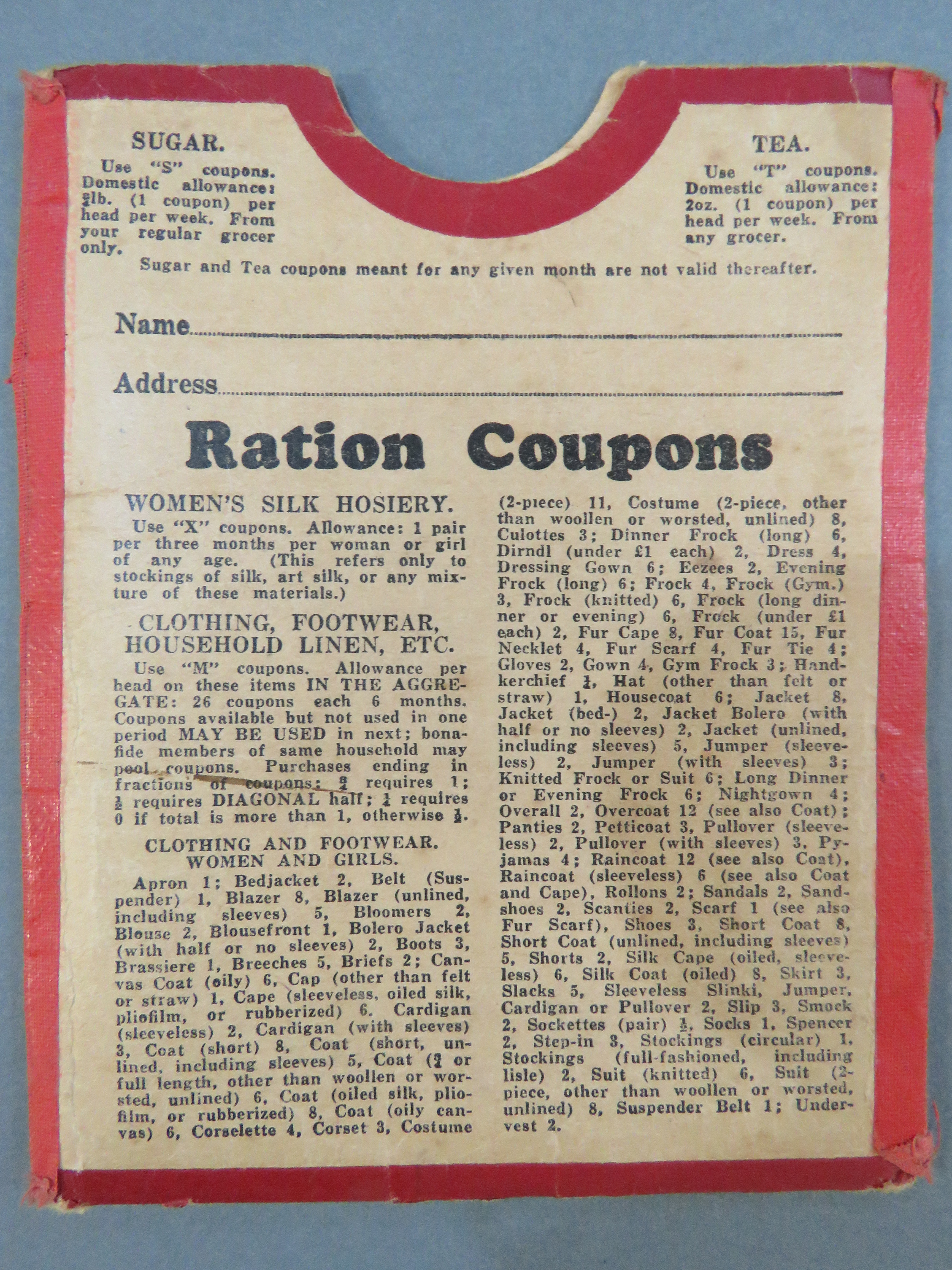 Early in the war resources from overseas like petrol were rationed. Soon after household items became harder to access. From 1942, the New Zealand Government allocated a strict rationing system called “The Rationing Emergency Regulations” to those remaining in the country. As a large contributor to British imports New Zealand had to ration its own consumption to meet the requirements of overseas war efforts. Our country followed the example of Australia when introducing new rations, such as a meat ration starting in 1944. New Zealanders were allocated to spend a certain amount on each product per week rather than a certain weight. Therefore, with fluctuations in price bound to occur, wealthy people remained as restricted as everyone else by the coupon system.

A collection of ration coupons, books and folders which belonged to Arthur and Ethel Almond of Waikaraka, Whangarei, were donated to Whangarei Museum by L. Wilkinson. Each ration book has its own series number and they are date stamped between 1944 and 1948. The individual ration coupons are the most useful in revealing what goods the Almonds were able to access at certain times. Across these years, Ethel had to use coupons for hosiery (stockings), meat and butter, although most of the ones kept in this small collection were not used. Other items that came under government rationing were tea, sugar, household linen and other clothing. Some of the more important New Zealand made resources like butter and petrol remained rationed until 1950. If you weren’t picky (or vegetarian) you could access sausages, ham and rabbit unrationed, while beef, lamb and pork were rationed as much of their supply was reserved to send to Allied Forces in the Pacific and Europe via steam ship. Control of the ration system was kept by banning the sale of home-killed animals, although you could share the resulting meat with your neighbours.

A small card pocket Ethel and Arthur Almond used for holding their loose ration coupons has been preserved well and explains the rules for several products. Around 60 grams of tea leaves were granted per head each week and one pair of silk stockings were granted every three months. Coupons could be pooled together to purchase jackets, corsets and underwear. It cost 2 coupons for bloomers, compared to 15 for a fur coat, of which I doubt many were purchased during this time! The number of coupons a person could use was limited per week, although emergency rations could be granted in certain circumstances. Families were encouraged to destroy any coupons they had not used rather than sharing them as “Every coupon destroyed means more food for Britain”. A Mr. T. Sly is listed at Almond Courts, Whangarei, on some of the Almond’s coupons, suggesting a family connection and the sharing of coupons. Although little further is known about the Almond families’ war experiences, evidently Ethel and Arthur survived war time life and moved north. In the 1950s Arthur Almond became the head of the industrial department of Northland College and travelled internationally to research other education systems.

The coupons they left behind really hit home in our current time of worldwide uncertainty, but also serve as reminders that we can work together as a country for long term success. Tea and butter remain important household supplies like suggested on these ration cards, but they make no mention of toilet paper.