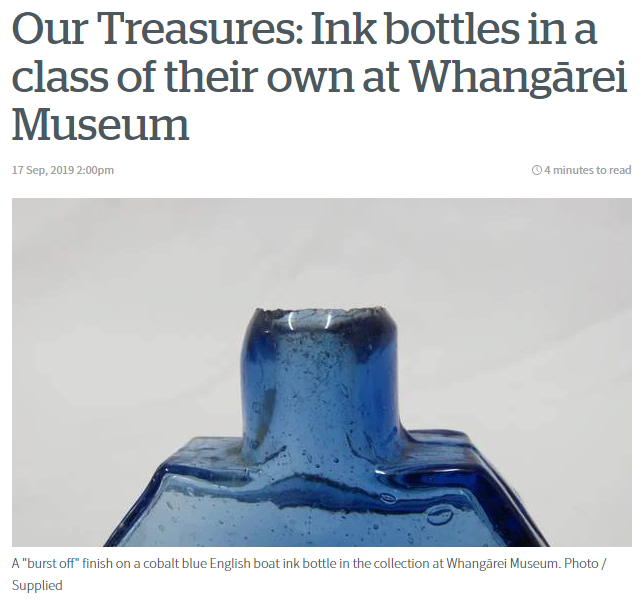 Bottles, bottles, and more bottles. While now disregarded as utilitarian vessels destined for our recycling bins, a multitude of individual features can provide snippets into a long international history of technological, advertising and product development. The Collections of Whangarei Museum hold many bottles, ceramic, glass and metal, but today we look at a specific class- ink bottles.

Bottles for holding ink were most often made from ceramics and glass and came in many forms, some novelty such as tiny houses or shoes. None of the bottles pictured have lids, instead, they were stopped with corks making them less portable once opened in comparison to later developed caps. Before and during the eighteenth century AD, ink was used by mixing cakes or powder with water at home. Ink bottles became common from the early 1800s, for holding the now commercially produced liquid ink. Small bottles were used for filling fountain pens and dipping quills into. Ink wells were more decorative items relating directly to using the ink rather than storage. If you look closely, characteristics like body seams, the finishing of the mouth, and the structure of the base each hold the imprint of their creators work and thus can potentially tell of when and where a bottle was made and what it may have contained.

Several examples at Kiwi North are characteristic ink bottles, particularly, from left to right, a glass boat, octagonal, and a cone shaped bottle. Their wide flat bottoms were designed to prevent tipping while regularly dipping a quill. The glass of the very collectable blue bottle was produced using cobalt (cobalt aluminate), one of the strongest glass colourants discovered in 1802, and common in the late eighteenth and nineteenth centuries. Its unique ‘boat’ shape has shoulder grooves to rest a pen. The obvious side seams right up to the lip with a “burst off” finish of the blue and green small bottles are clear evidence of early pre-machine manufacture, hand blown into a base and body mould, compared to the colourless machine-made cylindrical bottle from the early 1900s. The ‘burst off’ finish has not been finished by hand with shaping tools as was common with early moulded bottles, but merely cracked off from the blow pipe without reheating and smoothing the edge. For a mass produced, utilitarian, and often throw away bottle no time was wasted on shaping a nice finish.

The octagonal bottle in aqua green glass was commonly English made between the mid-1800s to 1900. Variations on the multi-sided ink bottle include ‘conical pyramid’ or ‘umbrella’ styles, later on gaining an ‘applied finish’- a smooth ring of hot glass applied to the lip. Another small version is a short stoneware bottle to the left, similar to the classic ‘penny inkwell’-a sturdy desk sized pot for just one penny.

The larger ceramic bottles are from the mid-late nineteenth century and known as ‘bulk’ or ‘master’ bottles, for storing larger quantities of ink which was decanted into smaller bottles or wells when needed. Such stoneware bottles were mostly imported from England and often stamped with their manufacturer’s logo. One can imagine ink being sloshed out of the large brown crock in a classroom or office, a dangerous job if you ask me.

A lucky find for a historical artefact- a paper label- tells us the local origin of the large pink bottle: “Meek’s Scarlet Ink for Steel Pens, Manufactured by W. J. Meek Ltd. Manufacturing Chemists, Dunedin”. After moving from London, W. J. Meek’s company produced ink in Dunedin at the turn of the century. His marketing throughout the early 1900s focused on kiwi nationalism to support New Zealand made products over imported inks. In fact, in 1911 Meek’s was advertised as “the brand used by the Government” (Evening Post). This particular bottle dates from before the 1920s as Meek’s moved to glass bottles after this time. A salt glaze gives the stoneware a pitted effect known as ‘orange peel’.

Several modern glass bottles with plastic screw on caps in the Collection are evidence of the continuation in the use of pen ink through the mid-twentieth century, but the rise in the mass production of convenient ball point pens, particularly by Bic, in the 1960s gradually replaced this classy but now old fashioned method of writing. Clearly we have come a long way from the bulk distribution of ink and regular chore of refilling both ink wells and pens. Growth in literacy around the world since the early 1800s is massive and something many of us do not even question. Yet with the convenience gained from our pre-filled and disposable pens have we made things more complicated and expensive for ourselves in a throw away culture?