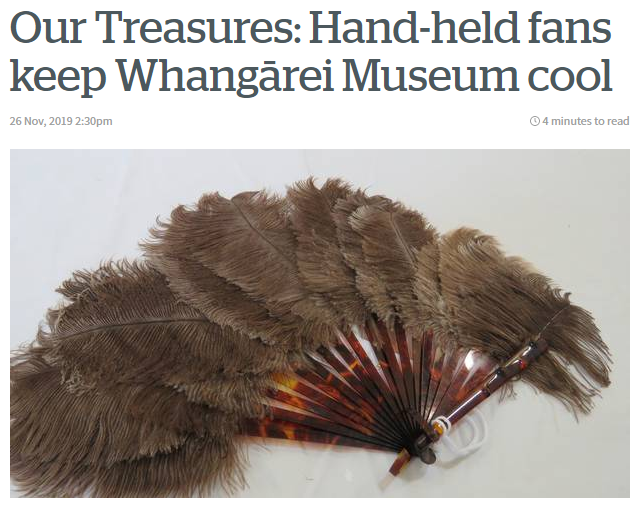 Whangarei Museum holds many beautiful items, treasures from the past that perhaps sadly today have been superseded by modern inventions. One such item is a hand held fan. The Museum has a small collection of such fans but it was a difficult task to select just three.

Fans have been around since the time of the Egyptians where slaves waved large fixed shape fans to keep the room cool and to wave away insects. These fans also figured in rituals and ceremonies. The folding fan originated in China and Japan and was modelled on the folding wings of the bat. Hand held fans could be either practical or symbolic.

In the 1500’s fans were taken to Europe by way of trade routes and became universally popular. Italy France and Spain all produced beautiful fans. Often scenes were painted on the leaf of the fan (the upper part) of places as souvenirs of holidays abroad.

In the 18th and 19th centuries fans became an integral part of court etiquette to such an extent that secret codes were transmitted by how the fans were held. Perhaps an early form of social media!

Gossip or flirtation could be carried out discreetly by the user of the fan, though possibly the main reason could have been  more  practical such  as protecting the wax based makeup of the time  from melting or wafting away the odours of doubtful hygiene. Who knows!

A hand held fan was usually made up of several parts. The leaf or upper part usually painted on paper or silk, the  ribs or sticks often bamboo and later celluloid or bakelite  in the 1920’s,  the outer guard – ornate in ivory or tortoiseshell  and the pivot that held the sticks together and allowed the fan to be opened and shut.

The use of fans declined in the 1930’s as motorised fans entered the market and later inventions like air conditioning took over. However some cultures, particularly in the Pacific Islands still use hand held fans as part of everyday use.

The first fan I chose was an Edwardian example, about 1910. Made of ostrich feathers and with faux tortoiseshell sticks and outer guard. The bumps on the guard were made to make it look like real tortoiseshell. The use of natural materials was common in Victorian times but time has taught us that these materials need to be conserved. This fan was donated by Elsie Karlsson of New Plymouth.

The second fan was donated by Katherine Bowden. It was purchased by her Aunt during a trip to England in 1932. This fan was harder to date but possibly Edwardian. It is made of a sheer black fabric appliqued with black lace with every alternate stick hand painted with flowers. The leaf is screen printed with ribbons and flowers.

The third fan is very unique in that it comes with its own box, decorated to match. It is a Victorian fan, the leaf painted with flowers and a bird. The sticks are bamboo. The outer guard is ivory, exquisitely carved with Chinese scenes. The lower ends of the sticks are celluloid. The box is papier-mâché with a coating of shellac. The interior is painted to match the fan.

Whangarei Museum is indeed fortunate to have these treasures among its collections.