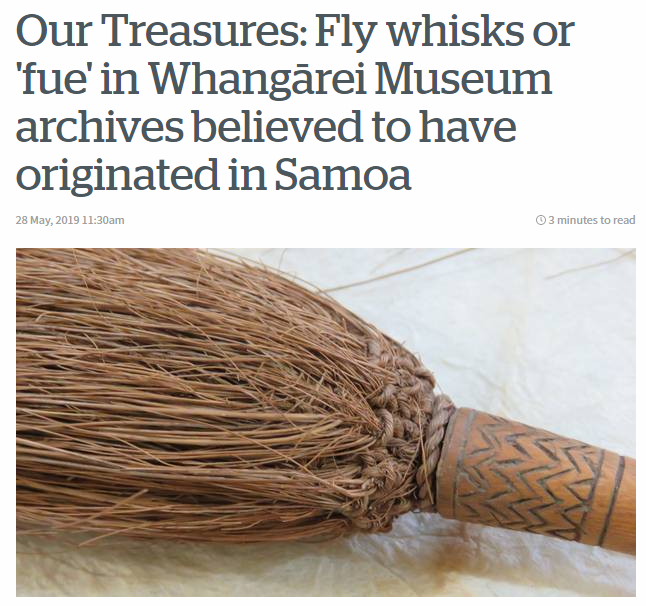 While many of the collection items housed in the Whangarei Museum at Kiwi North have connections to the area, early settlers, their families or historic events, there are also artefacts that come from other parts of the world.  Among these articles is a miscellany of Polynesian and Melanesian ethnographic specimens which include three distinctive, hand held personal objects.

The majority of the ethnography collection was accumulated over time by interested collectors and gifted to the Whangarei Borough during the early 20th century and it is believed that the three separate fly whisks formed part of these initial donations, although their exact provenance has yet to be determined.

Fly whisks were being used around the world in Old Persia as early as 500BC, in Egypt, Africa and India as well the islands of Samoa, Tonga and Fiji.  Known in Japan as ‘hossu’, the three fly whisks from Polynesia in the Museum’s collection referred to as ‘fue’, became representative symbols of chiefly rank.  They are an indication of a person’s status epitomizing the ultimate symbol of authority.

Said to resemble fly switches in appearance, fue are generally made from lengths of braided coir sennit (coconut husk fibre) attached to a wooden handle of equal length, but can also be manufactured using horsehair, human hair, bird feathers, coral beads and the tail hairs of elephants and yaks depending on the country of origin.  A variety of handles were incorporated, from plain with incised relief such as those in the Museum’s collection, to fine detailed carving combined with ivory inlay.  Some pieces would be repurposed from weapons such as the shaft of a spear or a club handle, which would retain their mana or sacred energy of their previous use.

Fly whisks had a dual purpose of both mundane and sacred uses.  As a practical tool, they were instrumental in keeping flies at bay and protecting food, but they were also employed as aids to orators during ritual aspects of traditional performances and deployed harmful spirits.  Usually presented in two main settings, either indoors within a fale (house) or outside on the village green, there are different connotations demonstrated depending on the context of the occasion.  Fue with short tassels were made for use inside, while those with longer tassels were used outdoors.

Throughout Polynesia, fue are symbols of power and prestige found in the possession of chiefs, orators or men of privilege.  By the early 1900s after British arrival and the introduction of horses, later fue were crafted using horsehair instead of traditional coconut fibre and it had become customary for horsehair whisks to be used exclusively for the highest of chiefs.  In Samoa, where two of the Museum’s fly whisks are thought to have originated, there is a culture of oratory which is highly developed, with its own style and language.  Carried as a visual symbol of status, it was said of a skilled speaker, “he is an accomplished chief, long has he used the fue”.  An orator using a fly whisk will often brandish it dramatically before he commences his speech, representing a hierarchical authority.

The intrinsic value of such specimens and their association with chieftainship and oratory connections made these artefacts especially desirable.  When exchanged, the recipient was perceived to occupy a similarly high rank and oratory skill comparative to that of the possessor which leaves the question of who obtained these relics and what were the circumstances surrounding their transference. 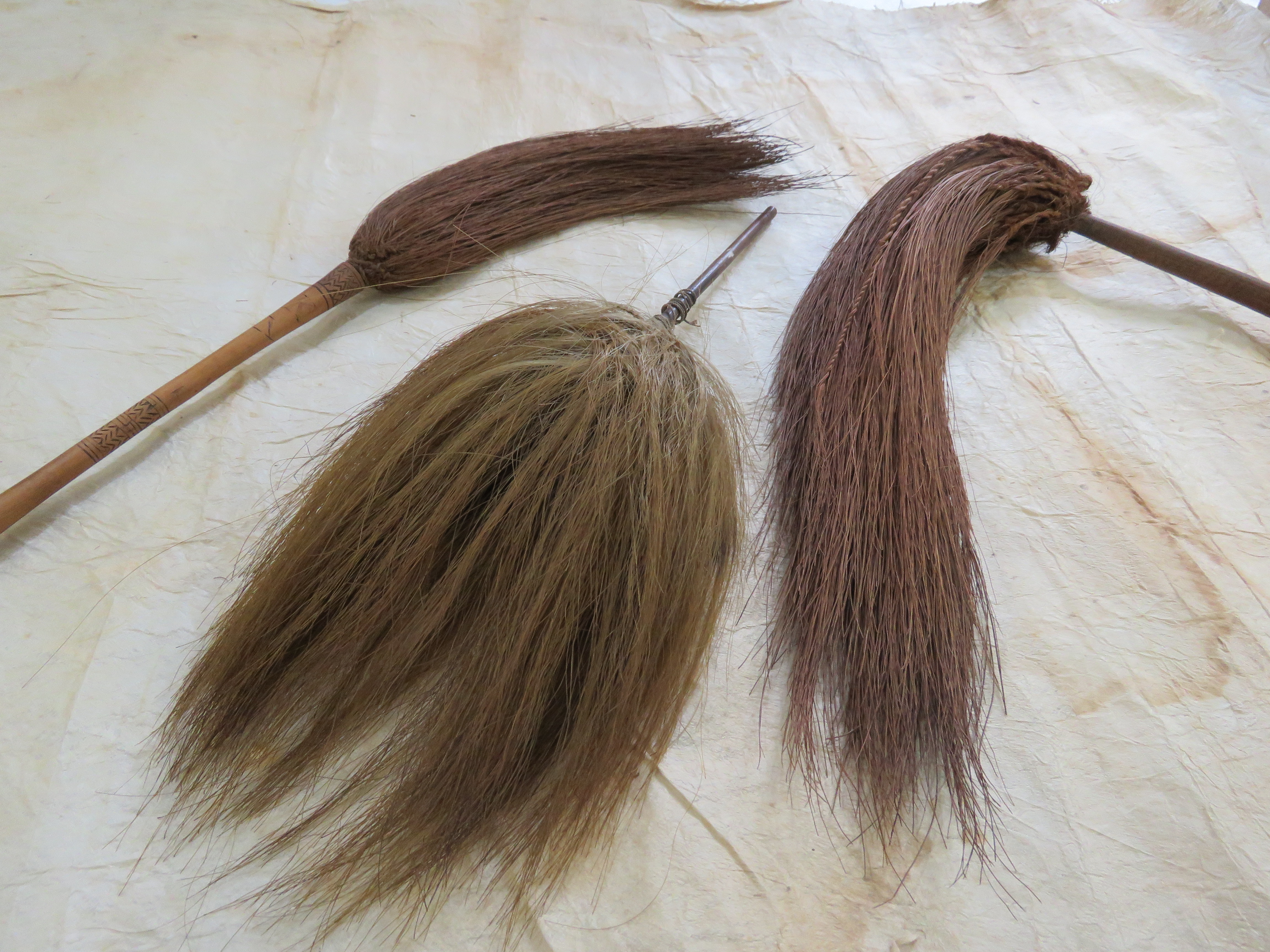