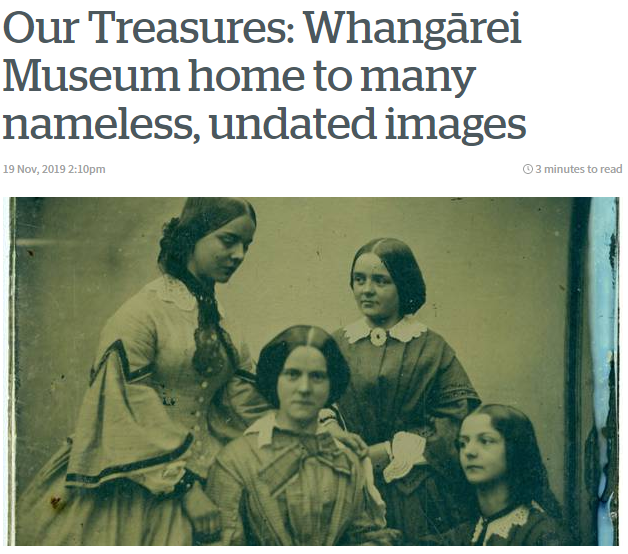 While Museum and private collections around the world contain vast numbers of photographs, sadly many have been discovered, donated or purchased without their original context and lack information regarding the people depicted, the location and date of the photograph. We still collect and preserve them however, owing to their significance as records of people, places, fashions, and technology. More than this, pieces of their stories can be clued together by careful dissection of the photo by eye. Two photos have been considered in this way while preparing them for an upcoming exhibition at Kiwi North.

The first, enclosed in a small case, is quite unusual upon first look. This item was donated to Whangarei Museum as part of the Holmes family collection and captures four young girls. The three earliest types of photographs, daguerreotypes, ambrotypes and tintypes can be difficult to tell apart, but this photo appears to have been developed onto glass rather than metal and therefore is an ambrotype. Both daguerreotypes and ambrotypes are recorded in New Zealand from the 1850s, the first on a sensitised metal plate and the latter onto glass. They were followed by tintypes in the 1860s-70s using iron plates. The very distinctive dresses and hairstyles help to support this mid-19th century date. Large dome shaped skirts supported by a crinoline and petticoats with a tight waist, rounded shoulders, bell sleeves and central hair parts with sleeked hair to fit perfectly under a bonnet were the fashions of the early Victorian period, 1850s-60s. A date of the late 1850s seems sensible for this photo.

The second photograph appears to come from a later date as it is an albumen print, designed for a photo album. It was donated by L. Bennett and has captured an unknown lady in a studio. Small ‘carte de visite’s’ were coming into vogue in the 1860s in New Zealand. Larger ones such as this are known as ‘cabinet photos’. Square corners were popular early on, changing to rounded corners in the 1870s. Luckily for us the photographer’s address and logo can help further refine the date. Heath & Bullingham had a studio in Plymouth between c 1877 and 1889. This date is again supported by the costume, even further narrowing our date to the 1880s, by the characteristic straighter silhouette. Crinolines were out of fashion and bustles creating broader hips and backside, with narrow sleeves and simple frills were in. With these two photos the elements of fashion could be refined even further as fashions in the Victorian era changed every decade.

Male fashion can be more difficult to date but with the addition of information such as the photographer’s details and knowledge of photographic methods used within a particular time frame a more accurate date can be ascertained. These artefacts are a mine of information even without names and personal stories connected to them. Now for your turn, can you date the last photo using these methods? Hint: Mr. and Mrs. Cafler were photographed by Martin & Partington, Auckland, N.Z.