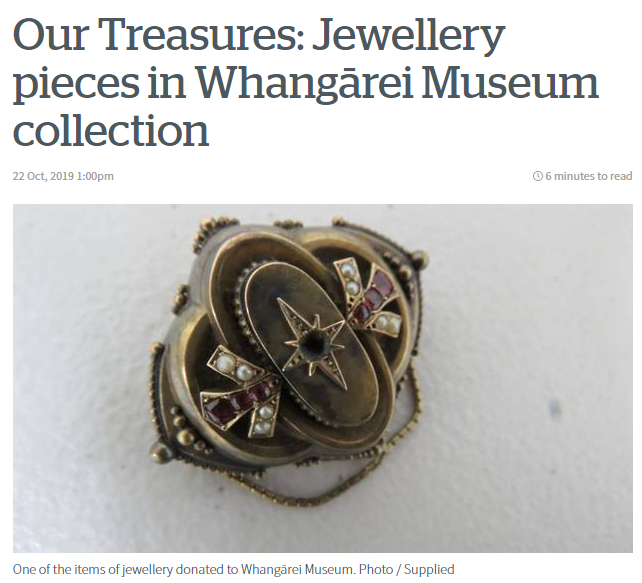 In prehistoric times humans sought to adorn themselves to demonstrate their beliefs, to protect themselves from danger and as a mark of status within their tribe or community. Shells, bones stones and teeth all served as early forms of personal decoration and such items were revered by families and handed down through generations.

The discovery of metals and how to work them was an important stage in the development of the art of jewellery. Such was the significance of many items that they were often buried with their owners for use in the afterlife. As the skill of the metalworkers increased the work became more intricate and with the introduction of gold became more highly prized. An example of an early gold collar known as the Shannogrove Corget, probably from the late Bronze Age 800 – 700 BC was found in a bog in Ireland. This item is now held at the Victoria and Albert Museum in England.

In Medieval times jewellery often reflected the status of the owner – royalty wore gold and silver and precious stones. Ordinary folk wore items made of copper or pewter. Up until the 14th century gems were polished rather than cut. Enamels were produced by firing ground silica at high temperatures onto metal. This technique is still used today.

The thought that jewellery was a protection against evil spirits and danger still persisted. Various stones were considered to have particular virtues e.g. pearls symbolised purity, red stones were often found in love tokens and rings

The cutting techniques for gems became more sophisticated, allowing the stones to sparkle enhancing the overall effect Religious use of jewellery as well as to demonstrate political power became of immense importance. In today’s world we still see the regard that these items are held in with the use of crowns and other regalia in ceremonies such as coronations.

By the mid17th century fashion began to exert even more influence on jewellery. Further advances in the cutting of stones and mining techniques as well as global trading made gemstones more available. As recently as the 20th century new gemstones have been discovered e.g. Tanzanite, a brilliant blue purple stone was discovered in Tanzania in 1967.

In the 18th century a new cutting technique known as brilliant cuts was devised. This allowed the many faceted stone to sparkle as never before, with the many surfaced pieces catching the light. These stones were usually set in silver or platinum (which was coming into common use around this time) to further enhance their shine. Jewels were also appearing as intrinsic parts of garments such as bodices, collars, gloves shoes and even swords were heavily encrusted with jewels.

With the 19th century came huge industrial and social change, however the jewellery of the time tended to reflect the classical times of ancient Greece and Rome. Discoveries in in Egypt such as the treasures found in tombs, influenced jewellers and many goldsmiths sought to revisit ancient techniques.

The Victorians had a strong interest in natural world and this was reflected in the jewellery of the times, many pieces depicting flowers, birds and insects. Ingenuity was displayed by making pieces that could be used in a variety of ways. A tiara could be dismantled and worn as a necklace, or parts of a brooch separated to become pieces to be worn in the hair. Some stones had tiny springs attached so that they moved with the wearer to further enhance the brilliance of the gems.

The Arts and Craft movement at the end  of the 19th  century saw a  move  away from the  mass production of jewellery and a  return to the  making  of individual  pieces and the use  of shaped and polished stones rather  than  cut gems.

Art Nouveau style developed in the early 20th century and the futuristic geometric styling became very popular. Marcasite and enamel was widely used in this period though marcasite had existed in some form   since the time of the Incas.

In the 930’s gold was enjoying a revival, partly due to it becoming cheaper that platinum. Note: gold is at $1400 an ounce today.

Since the 1960’s jewellery styles and materials have been  constantly redefined. Advances in technology and the use of non-precious items such as paper, plastic textiles and synthetic gems have revolutionised what  people wear as adornments today and are less likely to indicate status but rather a fashion statement.

Whangarei Museum holds a number of jewellery pieces that have been donated over the years. Here is a selection of items with interesting backgrounds.

1.       A brooch depicting a flower and leaves in silver. Nature themed jewellery was very popular with Victorians – donated by Mrs O. Cullen in 1963.

2.       A crescent or moon shaped brooch made with  either bones  or animal teeth, joined at the centre by a  silver bad and safety chain from the Waldron collection. The Victorians commonly used animal bones, teeth, horn and claws as jewellery. The crescent shape was widely in use around the time of the first Wold War.

3.       A mourning brooch set with diamonds and garnets. These brooches often contained hair or photos of the deceased. World War One created a great wave of loss and grief and these brooches were worn to show respect for and to preserve the memory of those killed in battle. Another piece from the Waldron Collection.

4.       A bullet brooch. Again another relic from W.W.1. These items were known as “trench art”, pieces were made by soldiers and sent home to family and loved ones who wanted to support their men at the front.

5.       Mummy beads purported to be from 2000 BC. These beads were accompanied by a rather cryptic note that reads “ found by Nosey Croucher (Famous Archeologist) at Heliopolis in 1917” These beads give the appearance of turquoise but are in fact, faience – a silica sand of crushed quarts plus amounts  of sodium and calcium. The addition of copper oxide gives the turquoise colour. These items were ground into a paste from which the beads were formed. Possibly found while the New Zealand Expeditionary Force were based in Egypt during World War One.

The Museum plays a major role in preserving and recording items from our history and gives an interesting glimpse into how people lived and worked and played in the past.