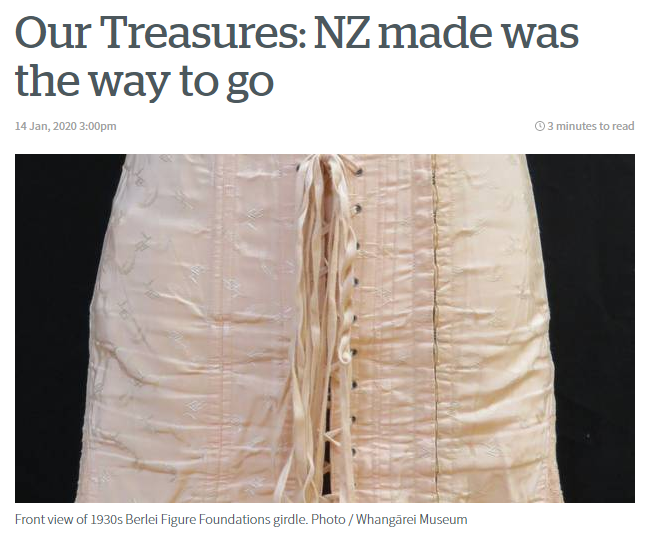 With so much of our clothing being made overseas now it is difficult to imagine a thriving New Zealand clothing factory scene, especially lingerie. However, the New Zealand-made fashion scene has only become this way in the past fifty years and garments in Whangarei Museum’s collection are evidence of the prolific clothing makers and, in particular, corset makers that recently supplied our nation.

Most of the undergarments in our collection from the early 1900s were handmade. Then suddenly there is a rise in garments from the 1930s to 1970s with labels sporting the now rare “made in New Zealand”. Foundation wear was quite complex in the early to mid-twentieth century and the many parts making up an everyday female ensemble required special design and craftsmanship followed by even better fitting. Radically changing materials and technology were demanded by consumers globally to make girdles, corsets, suspender belts, stockings and brassieres more comfortable and flexible but still supportive.

Some of the New Zealand brands in our collection include Canterbury, who also produced designs by Jockey, Daintee-Form Foundations, McCoy Garments, Mayes, Roslyn (Mosgiel), and Manawatu. In an April 1974 Farmers’ catalogue a page advertising longline bras, pantie girdles and singlets includes the assertion “All clothing made in N. Z.”, a statement that would be rare in Farmers’ advertising now.

Big name company Berlei also had garments made here. Founded in Australia by Frederick and Arthur Burley in 1910, Berlei corsetry was sold in New Zealand in the 1920s. With the help of the University of Sydney the company stood above others in the corsetry industry by developing a more complex sizing system. As a result their Berlei Type Indicator chart was used by store fitters to figure shoppers using five predetermined ‘types’. The need for such fitting services is emphasized by the opening of a School of Corsetry in Auckland in 1930, to train skilful corsetieres and figure specialists who then helped women across the country choose the right foundation garment to create a well-proportioned figure beneath the sleek fashions of the era. The following year, Berlei opened their second factory in Auckland, this time a large state of the art American designed ‘Berlei House’ on the corner of Wellesly and Nelson Streets.

A 1930s girdle currently on display in our ‘Inside Out’ exhibition was likely made in this factory, showing the classic “Berlei Figure Foundation” label. The girdle is made from a fleshy peach coloured rayon with elastic panels at the sides. It simply wrapped around the hips and was tightened by lacing the front. As a relatively short and square shaped girdle, the label confirms it is size 36 and was designed for the figure type ‘Short Below Waist” or “S.B.W.”. In a time where detailed and personalised clothing sizing was rare, Berlei’s success was such that further factories were opened around the country, including in Huntly and Hamilton. The Auckland factory closed in 1973, but the building remains of significance as a heritage listed site. So consider this history the next time you pop out to buy your Berlei underwear, and perhaps lament with us the loss of undies made right at home.