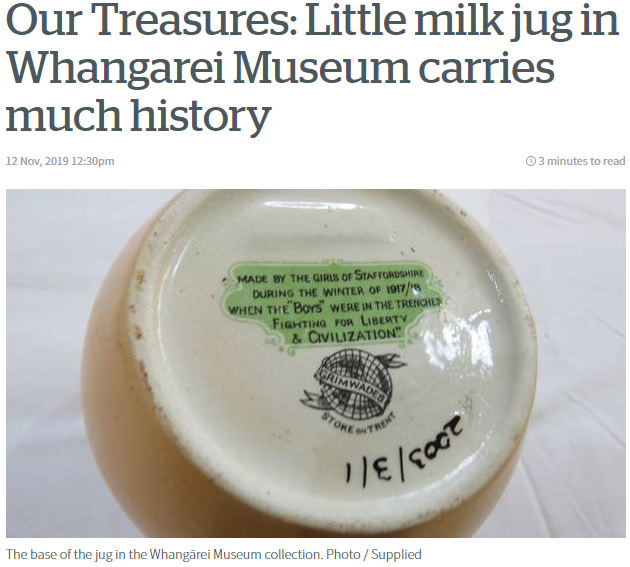 Working as a volunteer at the Whangarei Museum has allowed me to continue my fascination with old and interesting objects.

The small cream coloured jug pictured here, while appearing ordinary and of no special significance has a rich history with connections to World War 1 and the suffrage movement in England.

This jug was made at the Grimwades Pottery factory founded in 1885 in Staffordshire (now known as Stoke on Trent).

Staffordshire potteries were from the early 17th century the centre of ceramic production due largely to the local availability of clay, salt, lead and coal. Hundreds of companies, big and small produced all kinds of tableware, as well as decorative and industrial items. They also developed bone china, jasperware (matt finished pottery) transfer printing and glazing in the low and middle price range. The two Grimwade bothers, Leonard and Sidney made creamware ceramics for general use.

World War 1 began in 1914 and Grimwades began producing crockery screen printed with war themed cartoons drawn by Captain Bruce Bairnsfather, a noted cartoonist of the times. The horrors of war and life in the trenches were portrayed in the cartoons with a light and humorous touch. They were intended to help raise the morale of those who were fighting at the front as well as for those at home. Despite their popularity with the troops, there were some objections to the “vulgar caricatures” Nevertheless their success was ensured through popular demand.

This little jug depicts two soldiers side by side in a bomb crater on a desolate battlefield with the caption, ”Well if you know  a better “ole go to it!” The cartoons were also published weekly in a paper of the times, “The Bystander”

With regard to the suffrage connection, women in England had been striving toward getting the vote as had their sisters in New Zealand in 1893. The advent of W. W. 1 had meant women in England were now filling occupations normally held by men, who were now serving overseas. On the base of the jug reads the following “Made by the girls of Staffordshire during the winter of 1917 – 18 when the boys were in the trenches fighting for liberty and civilization”

After the war ended pressure mounted   for women to get the vote. Their valuable contribution to keeping the wheels turning on the factory floor and in business meant their right to vote could no longer be denied and the law was changed in 1918.

Who would have thought this little jug that once contained milk also carried within it so much history as well.