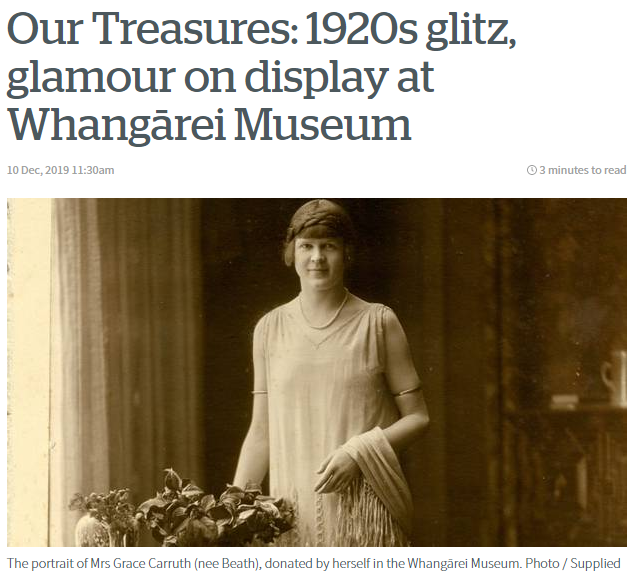 Specific decades of the twentieth centuries have characteristic aesthetics, some more so than others. The 1920s is a period which is still known and idolised for its iconic ‘Flapper’ style, epitomised by shorter skirts and straight silhouettes for women. An era of revolution, ‘roaring’ out of WWI, the twenties are often cast in modern media as a period of glitz, glamour and ostentatious partying. In some cases, and social circles, this was true. One of the most important and radical movements that we can see from archival and other documentary heritage of this period was the change in women’s clothing. Since the turn of the century and particularly following the war, it was starting to become more acceptable for women to adopt greater freedom and activity in public, particularly through partaking in sports like tennis and cycling. Their clothing reflected these changes. The many layers of petticoats for shaping the upper skirts were abandoned and the main skirt or dress became the shortest it had ever been in Western history. Curvy hips and bust with a small waist as idealised during the Edwardian period (although often supported by creative padding) were thrown out the window in support of a boyish straight silhouette. The undergarments of the era match this story as foundations for the overall look, but that is a conversation for another article.

A photo in Whangarei Museum’s archives that clearly shows this new dress, as modelled by Miss Grace Beath, before she married into Whangarei’s Carruth family. Grace embodies the ‘Flapper’ as we know her today, short, straight shift dress, stockings, short bod, headband and long necklace. However did you know that the term Flapper originated before the 1920s and certainly was not used to describe such a fashionable, strong woman. During the 1910s many magazines published articles for mothers discussing their young “flappers”. Questions included how to dress the awkward “flapper”. In this first iteration, they are referring to young women of around 10 to 16 years old who as today find these years particularly awkward. Here the term “flapper” depicted a woman not yet grown, with her skirt hems not yet lowered and her hair not yet put up, so that her plait flapped down her back.

At some point the use of the term changed to more closely align with our current interpretation, possibly as many of these young women grew up a bit and were the ones themselves out and about in the latest fashions, listening to Jazz music. Looking at the young Grace Beath in this image brings a smile to my face seeing one of our locals wearing the latest fashions of her time, hopefully savouring the newfound freedoms offered by such radical dress changes.