Today’s find, a rare copy of “The Times” No. 298, price 6p, published by J. Bonsor, Salisbury Square, London dated 3 October 1798 and donated to the Museum from the Clapham Collection in about 1963 (1968/62/14). The pages are set out in four columns and there are no photographs or pictures. Articles and advertisements are in no particular order, job vacancies and other snippets appear randomly. The paper is in excellent condition considering its age and gives an interesting snapshot of what was happening in England and abroad at that time.

The main item on Page 1 reads,

“Grand Gala in Honour of Lord Nelson’s Glorious Victory over the French Fleet at the mouth of the Nile. The proceeds to be devoted to the relief of Widows and Orphans of the brave men who fell on the occasion.”

Reading through the pages I found there were many similarities to what one finds in the papers of today, reflecting peoples hopes, dreams and ambitions, for example in the job required,

“As a upper servant in a small family, a widow between 40 to 50 years of age, or would undertake the management of a family for a single gentleman or lady. No objection to take an active part in the work of the house. Has lived in the above capacity and was eleven years in her last place when her lady died. Can have exceptionable character from most respectable references”.

The ‘For Sale’ column lists, “One live Male elephant, about three years old, plus 1095 elephant teeth.” When pets get too large is always a problem, but that many teeth?? Today’s animal conservationists would be up in arms.

In the ‘Lost and Found’, “Bank note No 4992 – Lost or mislaid on September 24th or 25th, value ten shillings. Small reward”. Good luck with getting that back.

In the advertisements, “The Excellence of that Invaluable medicine, Spilsbury AntiscorbutiC Drops.”

On page 6, there were reports and further details of Nelson’s victories, including lists of Officers killed or wounded, however no mention of lesser ranks.

An advertisement for a young ladies finishing school would not go down well in today’s society. It reads. “Miss Rutter’s Boarding School for Young Ladies are carefully instructed in grammatical knowledge of the English and French languages, and in various branches of useful and ornamental needle work.”

There is great variety in the articles and advertisements, eg. Animals for Sale, Court News, Board and Lodging, Shipping News, To Let, Public Events and Lectures etc. One lecture in particular –

“Midwifery, Medical Theatre, London Hospital. On Wednesday October 10th at 11 in the forenoon. Richard Dennison, M.D. F A S, main midwife to the City of London Lying in Hospital and Lying in Charity for delivering poor women at their own habitations, will commence his lectures on the theory and practice of midwifery and the diseases of women and children”. No comment!

The readers of 1798 would have had their work cut out on locating the parts of the paper that suited their needs, perhaps that was the plan of the Editor of the day, to ensure every word was read. 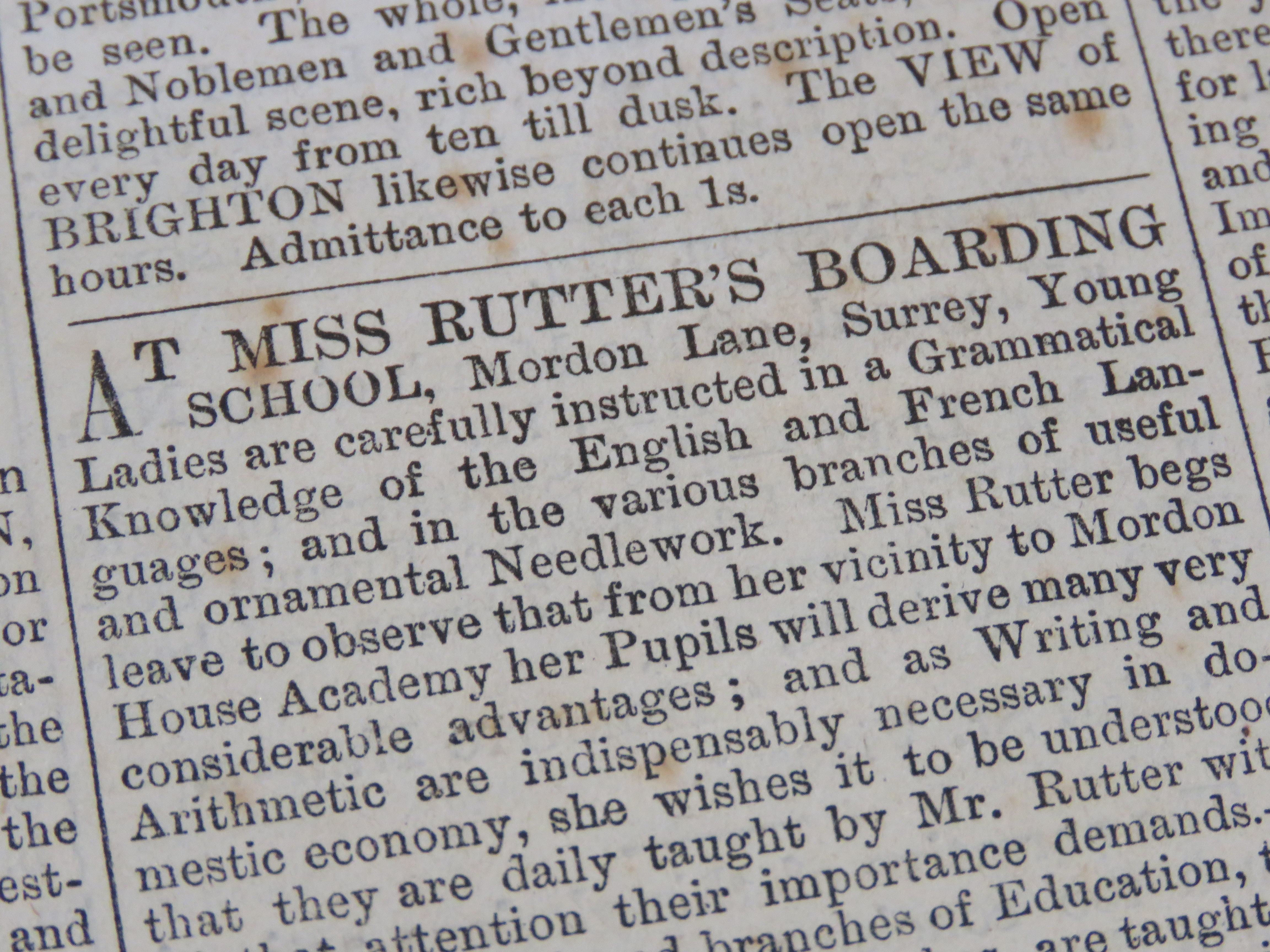 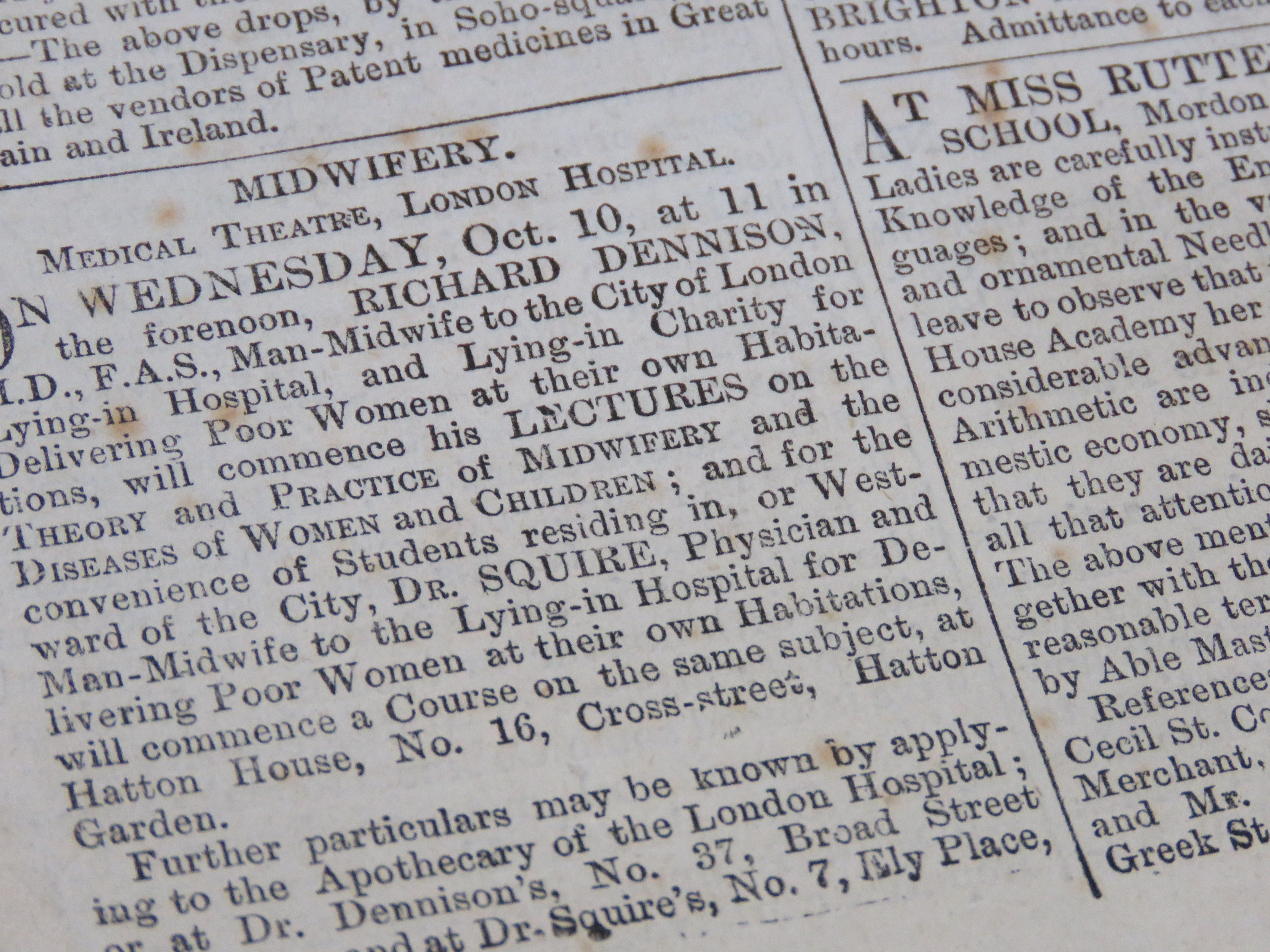