When I think of the household herbs and spices I use every week, I can only remember one or two brands that are available in local supermarkets. Greater variety can be found at specialty food stores; however, these aren’t included in my regular shop. One of the most widely available spice brands ins Gregg’s. They are also one of New Zealand’s oldest and best-known coffee brands.

Today we share four packets of Gregg’s spices and cooking goods dating from the mid-late Twentieth Century. Three of these packets were donated by J. Reed with a small collection of household items such as scales, bedcovers, and flour sacks. The Ground Cloves, Ground Mace and Black Pepper packets were available around the 1930s. While a multitude of products have been added to our supermarket shelves since - including essences, starch, instant puddings, and gravies -  these simple spices were the hallmark of Gregg’s products.

Originally the company was titled The Otago Coffee and Spice Works then W. Gregg and Co., after its founder William Gregg. After leaving Ireland for the gold rush at Ballarat, Australia, Gregg immigrated to Dunedin in the 1850s for a second opportunity at the growing town. Instead of entering the gold fields, in 1861 William Gregg chose a more dependable route in building an import and merchant enterprise on Princes Street, Dunedin, specializing in spices and coffee. Gregg’s focus on high quality goods for the domestic kitchen won the company many awards at New Zealand and Australian exhibitions. From its foundation Gregg’s has been a household name and has maintained its reputation for more than a century.

In 1925 the Gregg’s and Co. Ltd. built their iconic Forth Street, Dunedin, factory which is still operational today. Out of this Forth Street factory, Gregg’s launched New Zealand’s first instant coffee in the 1950s. Not all of their products stood the test of time like their coffee. A special release of the 1930s which is no longer sold was ‘Seameal Custard’, made, as the name suggests from seaweed products.

The Poppy Seeds packet in Whangārei Museum’s Collection is an example of Gregg’s next stage of life and was donated by Mr. and Mrs. Sharrock to be part of Whangārei Museum’s old Bon Bon Shop display. The label reads “Cerebos Greggs Ltd. Auckland, Dunedin NZ” allowing us to clearly date this to after international company Cerebos Foods purchased of Greggs in 1984. Soon after this package release, Gregg’s introduced the more convenient shaker jars that are prevalent in stored today.

Over the century, Gregg’s products were to be seen in the pantries of most across the country alongside products from the likes of Edmonds and Tip Top. Celebrity chef Alison Holst endorsed Gregg’s products for their convenience to the modern housewife for whipping up secretly easy sauces and desserts.

Many of Gregg’s original products are still around today, albeit adapted to suit modern tastes. Packages and adverts from the 1970s to 1990s are deeply nostalgic to many New Zealanders who grew up eating lime jelly. Just the words “instant pudding” brings back strong memories of afternoon tea at Nana’s for me. What other Gregg’s products can you remember having in the kitchen?

These and other domestic food packages will be on display at Whangārei Museum from mid-June, exploring kiwi pantries and tastes. 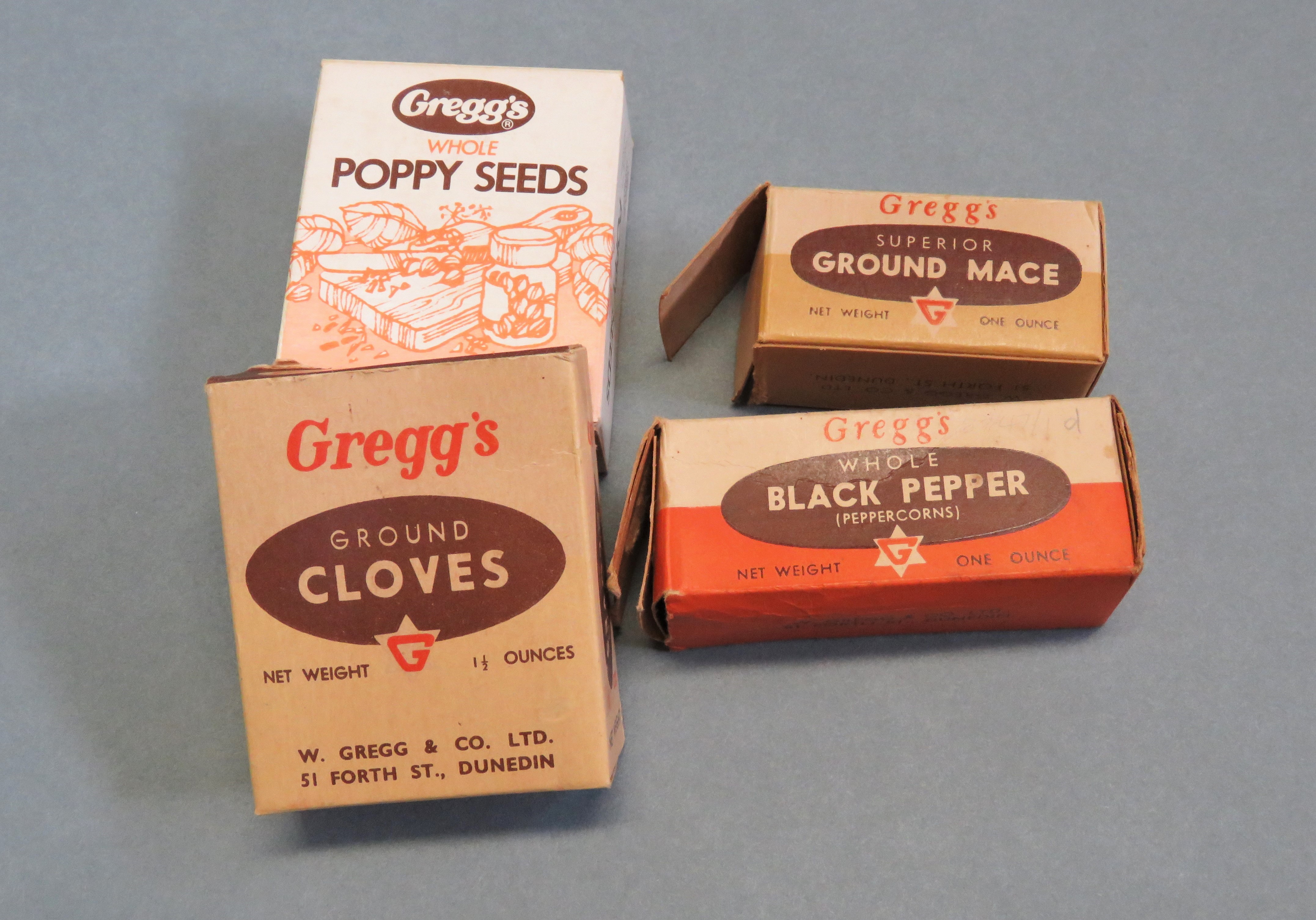