The sense of nostalgia one can get from simply looking at an object is amazing. Returning memories and feelings are one of the main aims of museums, achieved by preserving objects that emotionally connect us to the past and to each other. Playing cards exist in their thousands around the world in many iterations of older games. Today’s treasure is a deck of illustrated children’s cards for the game ‘Happy Families’, something that I remember playing in my childhood.

This particular set dates much earlier than anything I could have gotten my little hands on. While the box and any identifying material is missing from our set, similar sets are fortunately complete with these identifying features. In 1925 Chad Valley Games of Harborne, England, issued this new version of the Victorian game Happy Families, also known as Funny Families. Originating as a publisher, Chad Valley Games became a leading British toy making company and even became toymakers to the Queen in the 1930s. Chad Valley is now a toy brand of the Sainsbury's supermarket chain.

Artist Linda Edgerton designed much softer and more appealing illustrations for this set than the earliest versions of the 1850s. Invented by John Jaques Junior, the first Happy Families card game was released before London’s international trade exhibition- the Great Exhibition- of 1851. Advertised as a “New and most diverting game for juveniles” the earliest Jaques & Son set featured grotesque caricatures such as “Miss Silence the Usher’s Daughter” and “Mrs Bobby the Policeman’s Wife”. Jaques of London also produced several games that have survived the century, including snap, Who Knows?, tiddlywinks and snakes and ladders.

Our ‘Happy Families’ set was recently donated to Whangarei Museum by Chris McEvoy. Each central illustration depicts a member of a family, neatly illustrated in black lines with coloured interiors. During the Twenties Linda Edgerton also illustrated children’s books, postcards and other games for Chad Valley such as their snap card set. The reverse sides are blank. Consisting of 32 cards, there are eight individual families present. After the cards are dished out to players the game works like ‘Go Fish’ where each player asks another for a particular card in order to collect a whole family. A German version of the game is called Quartett. Present are families based on regular occupations- the Golfer, the Sweetman, the Sailor, the Pierrot, the Paper Man, the Jeweller, the Fisherman and the Farmer and their wives, sons and daughters.

A clear give away for the 1920s inspiration is the character of Pierrot. Much more than a sad clown, Pierrot was introduced to pantomime theatre in the Eighteenth Century and underwent many transformations in reaction to different artistic movements until this reincarnation in the late 1910s- with ruffled collar, triangle dunce’s cap and black pompoms. One family may be missing, as the original version produced by Chad Valley Games featured 40 cards.

Collectable sets of playing cards adorned with hand painted images or movie characters became quite an industry in the 1930s-50s. Much like cigarette cards, playing cards were affordable and transportable ways for companies to sneak more advertising into the market and increase brand loyalty. Disney produced many collectors card sets with cartoon characters from their films, as did sports teams, newspapers and, later, Barbie. Today Chad Valley toys are highly collectable due to their quality and renown; if only they still produced cards that looked like this. 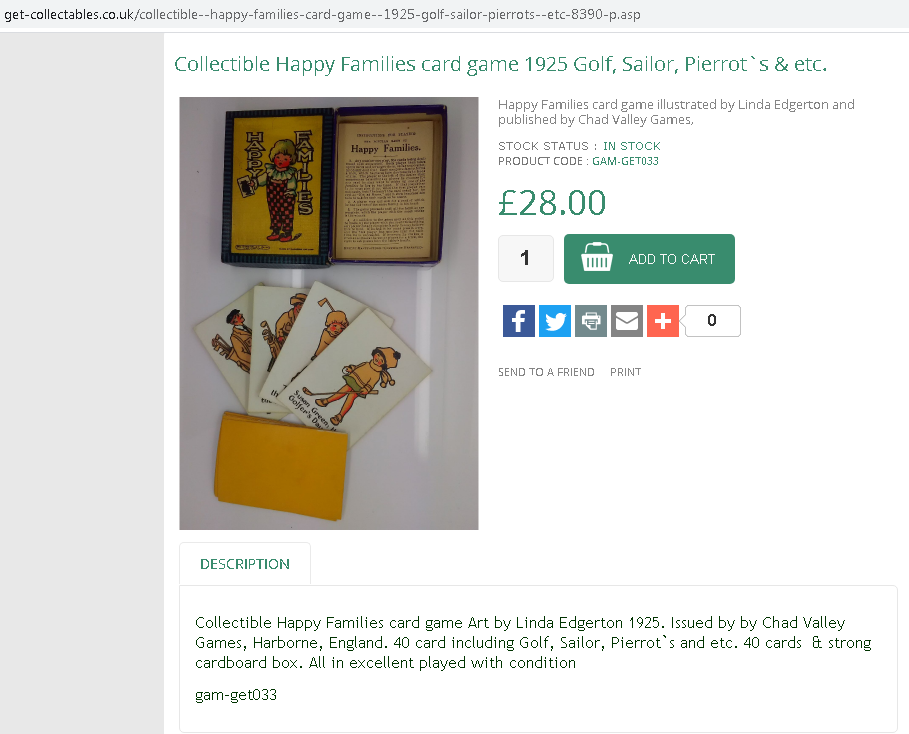