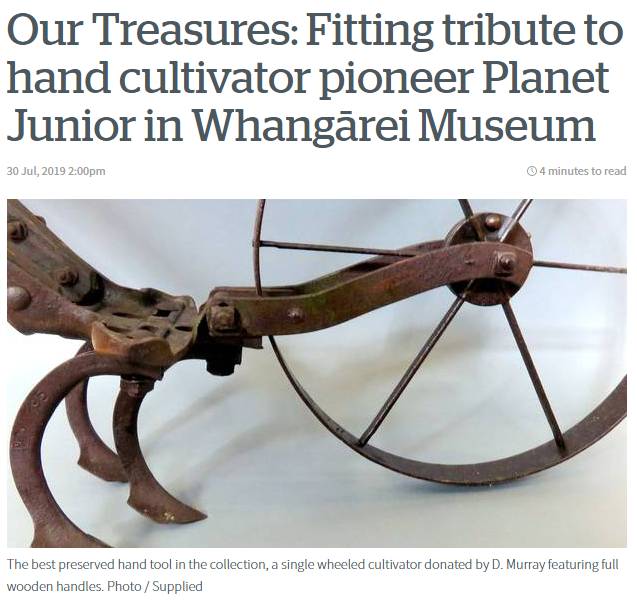 Horticultural technology has developed slowly over the length of human history. Simple ploughs, spades, and sickles used over a thousand years ago maintain their usefulness today. It is only the rise of mass scale monoculture cropping in the last 100 years which has transformed garden equipment into the large machines now unrecognisable by our ancestors. Examples of internationally popular garden tools on a smaller scale are three hand pushed cultivators from circa 1900 in Whangarei Museum (catalogue numbers 1994.86.26, 1982.10.1, and 1991.42.1). Made of cast iron with wooden handles, these cultivators were all made by American manufacturer Planet Junior. Each had the innovative benefit of spare attachments which could transform the tool into a hoe, plough, rake, drill, leaf lifter, and seeder for all stages of growing a garden

The first has two wheels with two hoe sweeps attached. The depth of these was adjustable, and they were used for weeding, preparing the soil surface, or creating furrows (rows) as it was pushed by hand. Only one partial wooden handle has survived, but it helps to give the impression of the direction and angle the hoe was worked in. The cast iron archway is embossed with “Planet Junior” and lower “Philadelphia, U. S. A”. The second cultivator, donated to Whangarei Museum by R. Morris in the 1980s, is a single wheeled cultivator with two hoe sweeps attached. These have been bolted on facing the other way from our first example, instead serving to sweep soil back over a planted row. A simple adjustment for two separate tasks. Iron letters arching over the tool’s body spell “Firefly”, the name of this special Planet Junior model. Our third example is the best preserved, as a single wheeled cultivator donated by D. Murray featuring full wooden handles. This Model 146 has three cultivator teeth attached for digging deep or marking out rows.

As the founder of Planet Junior, Samuel Leeds Allen was clearly a born businessman, innovator, and a gentleman. Discovered after his death were handwritten precepts for refining, among other things, punctuality, depth of thought, systematic behaviour, and politeness. Samuel’s striving for improvement in himself was matched in his business. In the late 1860s, early garden machines were still relatively crude and many farmers instead planted and weeded by hand. Samuel dedicated to solving this problem by inventing simple but effective garden tools. In 1866 he developed a fertiliser drill from washtubs and a wooden tyre, naming it ‘Planet Saturn’ noting the wheel’s affinity to the planet’s rings. His later innovation of a smaller seed drill was subsequently named ‘Planet Junior’, and thus was the beginning of an iconic business.

Planet Junior developed and manufactured new farm and garden tools over the next thirty years, expanding to a large factory in Philadelphia. The focus was on products of best quality and improved design. His target market was the small farmer or, more specifically, “pluggers”, defined as small farmers who took farming and the family home as the highest priorities and prospered through hard work (John R. Stilgoe, ‘Scientific Authority & Twentieth Century America’). Planet Junior began making their best-selling seed sewers in 1871 and their ability to quickly, smoothly, and accurately sow rows of seeds made them widely loved by home gardeners, market gardeners, and nursery workers alike.

With more efficient and interchangeable tools, gardeners could spend less money and time on their gardens but with the same or improved output of produce. A 1922 company catalogue states other benefits as “A little sunburn and sore hands are the first effects of this garden cultivating, but this is soon succeeded by a sense of pride in achievement, and a toning up of the whole physical system through exercise”.

With hundreds of patents to his name Samuel died in 1918, but his company continued to expand until the farming industry changed in scale and the company closed in 1968. The three cultivators in Whangarei Museum remain characteristic of a pioneering and colourful company, still revered by collectors today.