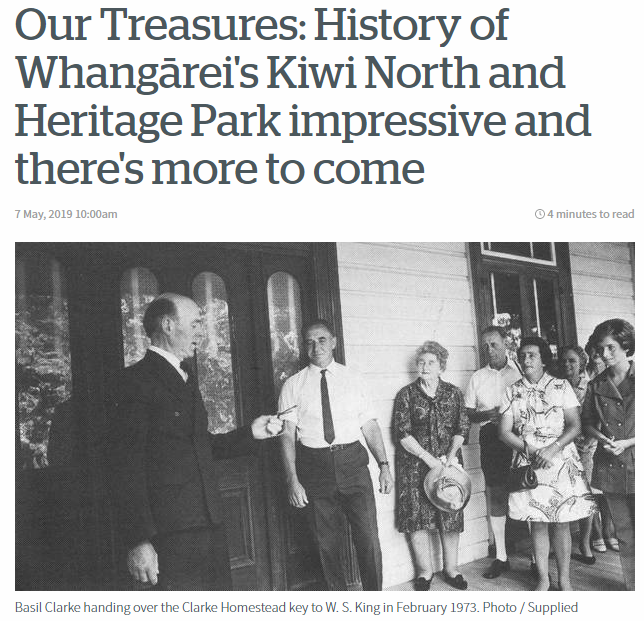 In 1972 a small group of people purchased, with great foresight, 56 acres of land inclusive of “Glorat”, the Clarke Homestead and most of its furnishings. For the princely sum of £42,000, with a generous donation by Eric and Enid Blow of the £1500.00 needed for the deposit, the home of the future Northland Regional Museum was secured.  Basil Clarke formerly handed over the homestead keys in February 1973.  Part of the agreement was that Basil was allowed 15 acres for his own use during his lifetime and he continued to live in the rear of the homestead until his death in 1983, although the front rooms were open for public viewing from 1976.

Over the years there were many developments including the addition of other heritage building including the c.1860s Oruaiti Chapel in 1975, the 1906 Jane Mander Study in January 1979 and the 1898 Riponui Pah School in June 1979.  At the same time Heritage Park was becoming the home for more and more clubs and societies such as the the Whangarei Steam and Model Railway Club, the Whangarei Vintage Car Club and the Whangarei Native Forest and Bird Protection Society under the leadership of the legendary force that was Marjory Maddren.  “Live Transport Days” and school visits were already being held throughout that time.   Mary and Margery Millington had gifted 6 acres of adjacent native bush in a bequest, which was in fact returning some of the land their family had purchased from James Clarke in 1920.

But the Museum, or Exhibition Centre as it was then called, still had to be built so in July 1979 the fundraising campaign led by Ralph Trimmer, was launched, and the foundation stone laid.  The building was officially opened to the public on the 24th March 1984.

And over the next 35 years the development continued including the formation of the governing body charitable trust Whangarei Museum and Heritage Trust in 2007 and rebranding with the overall title of “Kiwi North – Whangarei Museum, Kiwi House and Heritage Park”.  A nationally unique combination of experiences.

The old “Live Transport Days” have now become annual “Family Event Day’s “such as the hugely popular Medieval Madness and Story Book Easter Sunday.  The clubs hold a “running day” on the 3rd Sunday of every month.  The site is available for community engagement through events such as the annual Teddy Bears Picnic hosted by Whangarei Parents Centre and Fathers’ Day hosted by Barnardos.  Kiwi North is the venue for annual pre-school, company and end of year family parties, with a continual stream of birthday parties, weddings and other functions throughout the year.  Children who visited are now returning with their children, and multi-generational family visits are common.  The formal education programme engages with thousands of school students every year either onsite or through outreach in the community Northland wide.   For the staff and club members this place is their home away from home.

Plus it here in the Museum, Kiwi House and heritage buildings that our international visitors learn about our place, our culture, our unique animals and environment so that as they travel further they will do so with understanding and respect.

As the city grows and spreads to surround them the Kiwi North property along with neighbouring Barge Park, nestled beside Pukenui Forest, will become even more precious as protected community green spaces.  Available to engage with in so many different ways whether somewhere to take a head-clearing stroll, a day out with the family or proudly bring visitors.  History does not stand still and the future potential of Kiwi North is huge.  Along with the nearly completed conservation project for the Oruaiti Chapel and the following vast and vital conservation work needed to be funded for the Clarke Homestead, other exciting plans are underway which will result in an even more engaging and progressive facility for everyone, locals and visitors alike.

The Whangarei community should be immensely thankful to those that chose 47 years ago to procure this amazing treasure that sits on their doorstep.