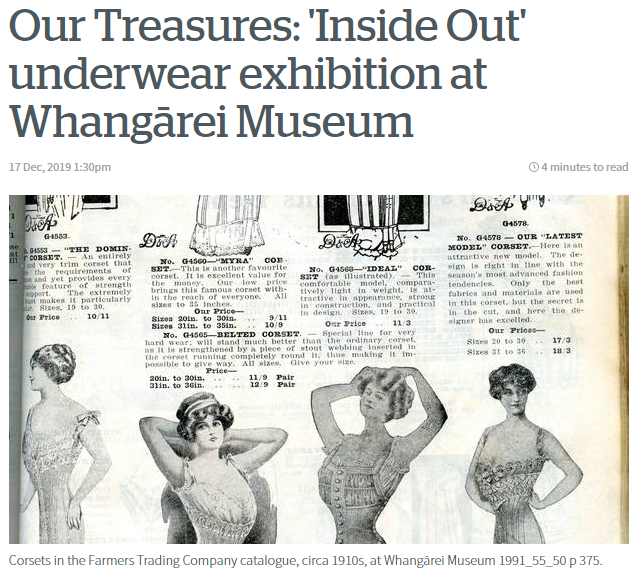 “Inside Out” an exhibition showcasing underwear of the 20th century opened on December 13th in the Mim Ringer Gallery here at the Whangarei Museum, Kiwi North.

The Museum holds some amazing garments in its collection and it is wonderful  to have the opportunity to include some of them in this exhibition. “Inside Out” is augmented by additional pieces borrowed from other Museums in Northland.

Corsets feature in the Exhibition and they have a fascinating history beginning in 16th century in Europe, believed to be Italy. From there the fashion progressed to France. The function of the corset was to flatten the bust, and a farthingale (stiff hoop skirt) was worn to make the waist seem smaller.

Corsets gradually made their way to England by the 1550’s. The stiffening sewn into casings in the corsets was either baleen whalebone or wood to maintain the shape.

By the 17th century the use of corsetry declined due largely to the introduction of the empire style dress which featured a high waist.

How fickle is fashion. However the corset returned to popular fashion in Victorian times with steel shapers and clasps replacing whalebone and with lacing at the back.

Accentuating the bust and the waist were no longer satisfactory on their own. Two new reasons, supporting the back and improving the posture were touted as health benefits and these soon became a marketing tool.

The corset fashion made its way to Canada. Canadian women wore corsets for a number of reasons but the underlying reason was to look slimmer.

Corset styles began to change in the Edwardian era and the “S” shape was born. This style narrowed the waistline, flattened the stomach, arched the back and thrust the bust forward. Sounds extremely uncomfortable. Full sleeves and a bell shaped skirt further enhanced the new “S” bend silhouette.

The wealthy in Canada imported corsets from France and England but by 1880 women could purchase a machine made corset. One of the largest manufacturers was the Dominion Corset Company, founded in 1886, who were producing up to 5000 corsets each week.

This company had a special connection with New Zealand as their corsets were widely advertised in the Farmers Catalogues of the times. Examples of the catalogues are on display at the Exhibition as well as some corsets bearing the label of the Dominion Company, commonly known as ‘D & A” being the initials of the two founders, George Amyot and Edward Dyonnet based in Quebec. “Daisy Fresh” and “Nuback” are two of the style names of the corsets.

Most of the work in making the corsets was done by women, generally in poor working conditions and for a pittance. Men were the designers and the executive management. Interestingly enough only single women were employed by this Company, if an employee married she had to leave.

In 1949 there was a movement that deemed the catalogue advertising done by the Dominion was “suggestive”. Such was the public pressure for this to change that the Company backed down and made their adverts more “demure”. On reflection, it seems it was a struggle between moral liberation and a longing to get back to the old values.

During the research for this article I found many items acknowledging the health problems that resulted from the wearing of such restrictive garments. Fainting being a common result, also lung restriction, damage to the ribs and the misplacement of organs and the atrophy of the back muscles due to dependence on wearing corsets.  Xray was discovered in 1896 and old films show graphically the reshaping of the body for the sake of fashion. Feminist thinking also believes the corset era kept women in their place, by not allowing them any freedom of movement.

Until W.W.1 corsets were a staple part of women’s fashion. While upper class women maintained the current fashion, many women preferred the newer fashion of the girdle and the brassiere (1920’s).  While still aiming for a flat stomach and the shaping and support of the bust the new elastic fabric was less restrictive and allowed women a greater freedom of movement.