Roads and land boundaries have always been a contentious and challenging topic throughout Northland, once known as the ‘Roadless North’. Travel between rural settlements and the burgeoning town of Whangārei could be lengthy and muddy.

The story of how Northland and the rest of rural New Zealand got its roads is often overlooked. From the 1870s many surveyors travelled north for a hard life tramping in the bush with theodolite, tripod, drawing gear, and camping supplies. Over the next 50 years surveyors were engaged by local and national government to survey and map large areas of land for subdivision, land sale, and the laying out of roads and railway lines.

Whangārei Museum looks after a set of equipment belonging to a surveyor who worked in the Waikato in the 1910s and 1920s. A beautifully preserved theodolite, tripod, and staff belonging to surveyor Y. Booker were donated to the Museum by W.E. Cottrell.

As a registered surveyor with the Survey Department of New Zealand, Booker used these portable measuring tools to survey topography and measure large areas of bush country in preparation for road building in the 1920s. Archives New Zealand holds a fantastic collection of original field books dating back to the 1860s. Two of Y. Booker’s field books are kept in this collection and are available to view online. Inside these little leather-bound journals are his detailed surveys of areas Aria and Otorohonga, Waikato, dating from 1910 and 1911, although at least one page is dated to 1923.

Booker’s theodolite is in perfect condition, safely tucked away in a velvet lined and leather covered wooden box. It is a classic turn of the century style, with brass fittings and black lacquer. A plaque on the inside of the box reads “Cooke Troughton & Simms Ltd. Makers of Surveying & Drawing Instruments etc. London, New York & Cape Town”. It would have been mounted on the tall wooden tripod and adjusted by turning various levelling screws. The two old and successful telescope companies Troughton & Simms and Cooke merged in 1922 but became a branch of engineering and weapons firm Vickers in 1924. These developments suggest that this theodolite was made within these years, although equipment made after this merger was still sometimes labelled CTS or Cooke Troughton & Simms.

The third item in this collection is a very attractive oak and brass measuring staff or gage, which would have been heavy to carry in bush country. The staff is telescopic in design. Once in place, two tiers hidden in the body could be extended to create a long ruler nearly 5m tall, allowing to be seen at a distance by the surveyor when supported by assistants. Other contemporary variants consist of two lengths joint by a hinge.

Fortunately for us Booker described this theodolite in detail in the December 1925 edition of “The N. Z. Surveyor”. From his words, we learn that the theodolite was made specifically for him by Cooke, Troughton and Simms and was appropriate for “preliminary location surveys, for ranging and chaining long boundary lines in rough country, for topographical surveys, and measurements of bush areas”. His use of this equipment with a small team is described: “In easy country I have traversed over 100 lines in a day; this requires two assistants to handle the chain. When the stadia is used about the same amount of work can be done with one assistant, btu the work would not be so accurate”.

During his work throughout Waikato in the early 1900s, Booker appears to have been based in an office in ‘Everybody’s Buildings’ on Victoria Street in Hamilton, titled “Booker & Jack, surveyors”. An exciting article in the Waikato Times (Vol 97, Is 15913) details the event of a fire in these buildings in 1924. Amazingly, a set of surveyor’s instruments “valued at £200” are mentioned as being in the offices but were saved as they had not been unpacked yet. Surely these are the very items pictured here.

Despite being tramped around the Waikato bush and surviving a fire which damaged other property, this surveying set is in remarkable condition, a testament to the early days of measuring out the landscape we live in today by hand and careful calculation. 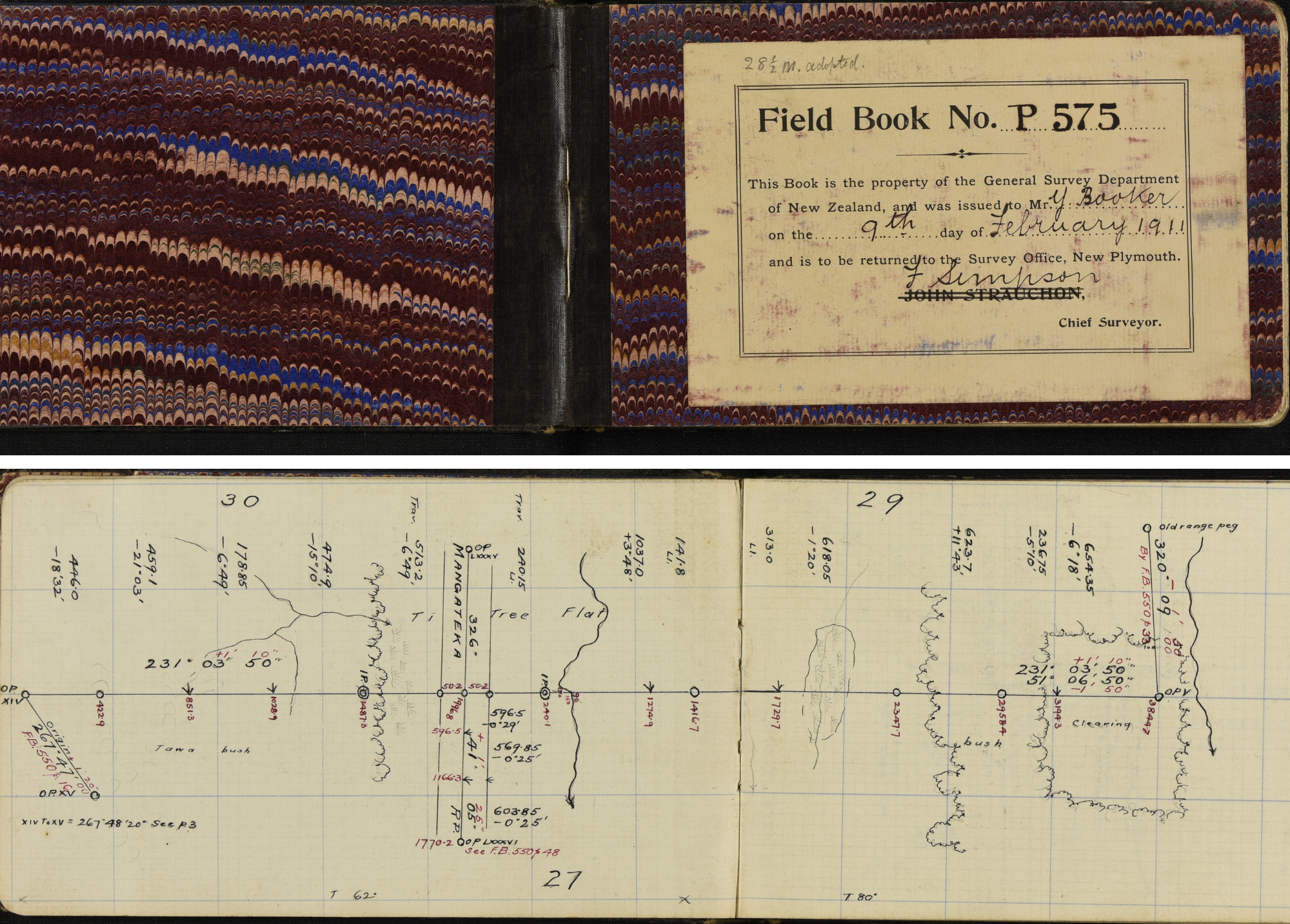