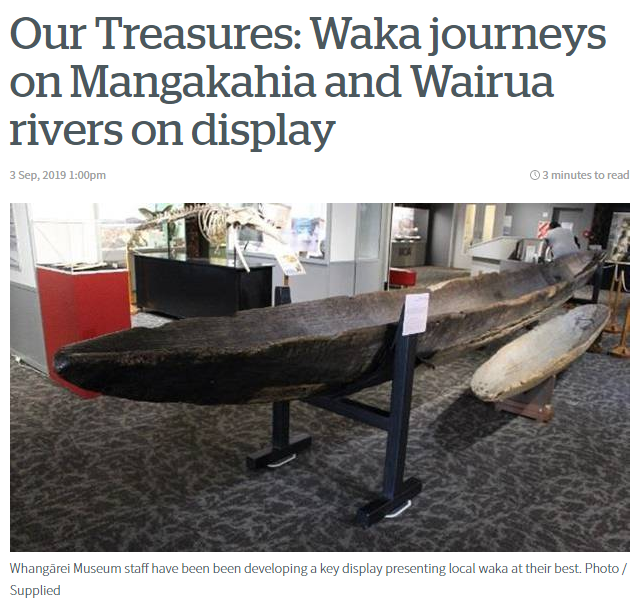 As commemorative events are gearing up throughout New Zealand to mark 250 years since Captain Cook's HMS Endeavour first visited our shores our thoughts turn to Polynesian heritage, our bicultural treaty, and the massive ocean journeys shared by the many cultures in New Zealand. Waka, in particular large waka ama with attached outriggers and sails were essential to the settlement of the Pacific, especially from east Polynesia to New Zealand. Maori soon adapted this form to traverse New Zealand's coasts and river networks, their craft assisted by the vast tracts of Podocarp and kauri forests. Two major highways in the North were the Mangakahia and Wairua Rivers, which both carry Papatuanuku's tears along to the great Wairoa River travelling south and out at the meeting place Kaipara Harbour.

While supporting a collective of native biota such as the endangered long and short fin tuna (eels) and feeding wetlands and freshwater springs, these rivers were once the only access ways, joined to traditional ara (pathways). Whangarei Museum at Kiwi North is privileged to be kaitiaki of two waka tiwai (river canoes), hailing from the Mangakahia-Whatitiri area, west of Whangarei. One is 9.6 m long and the other 5.5 m long, although both easily handled by one person. Each has their own whakapapa, leading back to their original crafting in the early to mid-nineteenth century, although the exact details of their origins are lost with the memories of our tipuna (ancestors). The first was kindly donated by Peter and Thelma Buisman in 1964 and the second by Cyril Wright in 1983.

At Kiwi North, we are currently undertaking a large shift in the Museum where these waka tiwai are present, assisted by a funding grant from Lotteries Environment and Heritage. Over the past few months we have been developing a key display presenting our waka to their best, within a conservation safe environment, with interpretative content telling their interesting heritage within the context of early tribal interactions, large scale kauri industries, new settlers, land sales and alienation and important Northland events such as the 1880s Poroti War and arrival of WWII American military camps.

We thank the Whatitiri Maori Reserves Trust, Environment River patrol, Te Au Marie Trust, and the Hihiaua Cultural Centre for their support of this project. Our aim is for completion by 31st October 2019, to tie in to the tarai waka (waka building) festival at the Hihiaua Centre and the arrival of the 'Fleet' in the Whangarei Harbour.

With waka craftspeople being termed an 'endangered species' at a recent Waitangi Voyaging Wananga, this project is a chance to bring greater appreciation to one of the earliest and most important forms of transport set on our local taonga, the Mangakahia and Wairua Rivers.