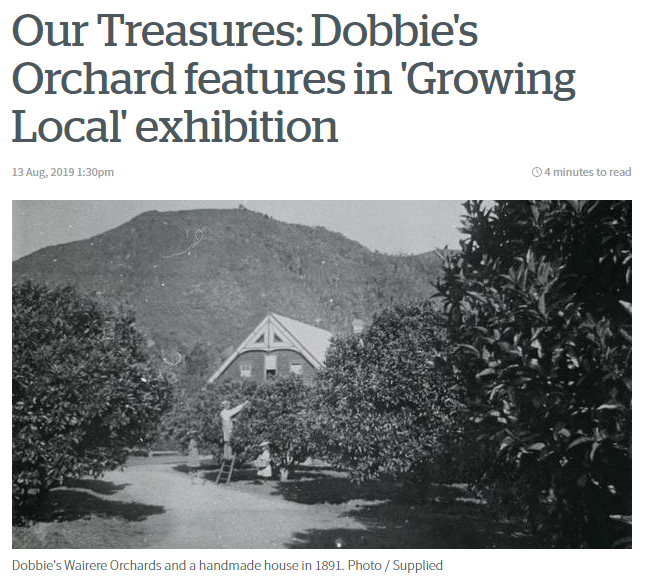 The familiar bush clad slopes of Mt Parihaka and fern banked Hatea River were once bordered by a thriving citrus orchard. Its owner Herbert Boucher Dobbie was an interesting character with many talents who travelled around on his favourite penny farthing and maintained a love for native ferns since his first arrival in Auckland in 1875, age 23. He first worked in Auckland then Picton in various engineering roles including drafting and illustrating before being stationed in Whangarei with the NZ Railways. His role was as Stationmaster of the new Whangarei to Kamo railway, which only ran three days a week, leaving time for other enterprises. The section he and his wife Charlotte (nee Gillfillan, daughter of Henry Gillfillan, founder-secretary of the Hikurangi Coal Company) purchased in 1881 stretched from western Parihaka down to Mill Road.

Dobbie had witnessed many orchards on his way across the Pacific to New Zealand and upon seeing the success of Mr Cafler in growing oranges nearby, he realised a potential opportunity.

Surely with a large dose each of hard work and determination Herbert and Charlotte transformed their manuka scrub into the idyllic scene pictured in photos in the Dobbie Collection in Whangarei Museum’s Archives (2004/16/2/12-23, 56-57). Whangarei Museum also cares for a teak baby’s cot which belonged to the Dobbies and was donated by Miss C. Lupton (1984/105/7).

Contributing to Wairere Orchards was the work of another local gardener, Edmund Weaver, who ran a nursery and later vineyard in Western Hills. Many of the orange trees grown by Dobbie were supplied and planted by Weaver. By 1890, Wairere had 2, 500 orange and lemon trees and had expanded with 1, 500 apples and pears, with plums, figs, walnuts and other trees scattered around.

A characteristic feature of Wairere was a tunnel running from below the family house along 20 m to the river bank. Before the advent of refrigeration, this cold, dark tunnel was used for storing hundreds of cases of fruit, jars of marmalade, and wine until they were transported by boat. The magic of the secret cave drew Herbert Dobbie’s teenage sons and friends for late evenings tasting Dad’s fruit wines, and in a nearly disastrous incident it had drawn the interest of the visiting Governor General’s (Earl of Glasgow 1892-1897) two sons, who nearly lost their heads while zooming down in a cart through the low tunnel entrance.

Dobbie’s tunnel is listed as an archaeological site with Heritage New Zealand and what little remains is on private property. However, we are lucky to still enjoy Dobbie’s reserve up the north-western slopes of Parihaka, intact with the extensive remains of New Zealand’s largest pa complex - kumara pits, house platforms and defence earthworks. The Dobbie’s left Whangarei in 1897 and later subdivided and sold their site to the Crown, but Herbert’s passion for New Zealand native fauna is exemplified in his donation of 44 hectares for the walking reserve it remains today. A stipulation for the reserve was that “no one was allowed to interrupt the important work of a gardener by engaging them in conversation or otherwise!"

After a stint in Africa Dobbie settled in Auckland and set up a fernery. Having published the ‘blue book’ of white illustrated ferns on a blue background during his early days in Whangarei, in 1921 he finally published a widely popular and still well regarded illustrated book titled ‘New Zealand Ferns’. For further reading, a well-researched compendium titled “H. B. Dobbie—fern enthusiast” by J. D. McCraw is published in New Zealand Journal of Botany.

“Wairere Ave” and “Dobbie’s Track” remain testament to Herbert and Charlotte’s work here. Our Parihaka reserves blanketed in lush ferns and trickling waterfalls are an ode to Whangarei’s rich history, the tipuna who lived and perished here, and to a group of passionate gardeners, contributing to one of Whangarei’s key community spaces and attractions.

Dobbie’s Orchard, along with other early orchards, features in the current “Growing Local” exhibition” at Whangarei Museum.