The Northern Advocate | Stitch In Time 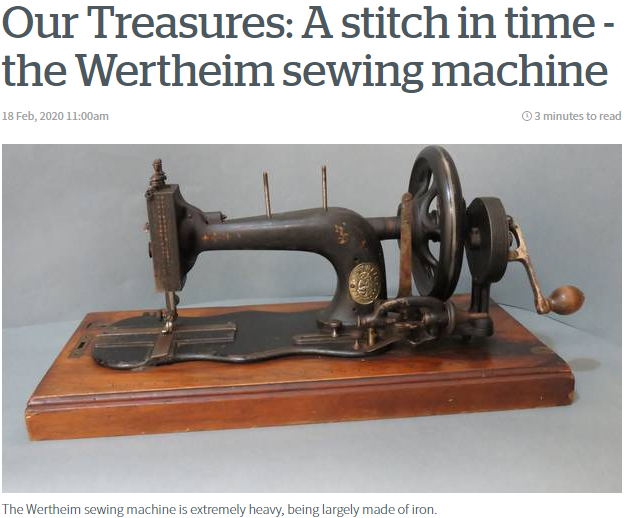 Gone are the days when every young woman was expected not only to be a competent home maker, a great cook, a serene mother of a brood neither seen not heard and of course an expert seamstress. In the mid 19th century the invention of the sewing machine must have revolutionised life for women. Gone was the drudgery of hand sewing often by poor light and well into the night. For the well off a seamstress would have been employed, again working by candle light at all hours.

The ‘Singer” was a commonly used machine but there were other brands attempting to break into the sewing machine market.

The Whangarei Museum holds a number of interesting sewing machines both hand driven and electric, and examples of very diverse brands.

I chose the “Wertheim” in its handsome wooden case inlaid with marquetry. It is extremely heavy being largely made of iron. The Wertheim factory was founded in 1868 by Joseph Wertheim in Frankfurt, Germany. At its height the factory employed 650 workers. Pictures of the factory show an austere multi story building with small windows. Quite forbidding. The company trademark was a dwarf holding a hammer which is known to have been used until at least 1925.

The mark was pressed onto the front of the machine near the hand driven wheel. However in 1909 the Star of David was added, reflecting the Jewish connection of the Wertheim family. In 1870 a subsidiary was formed in Barcelona under the Wertheim name. Complete machines were imported and sold all over the world. Amongst these were the English “Jones” machine. Obviously Joseph had a head for business by varying the brands he could sell on. Locals in Barcelona began calling the Wertheim machines, “las rapidas”.

In 1915 the production of totally manufactured Spanish Wertheim was commenced and continued until 1932. With the threat of war in Germany in the late 1930’s and the persecution of Jews that was to follow, the Wertheim family fled to Spain. Despite converting to Christianity from Judaism, they still feared the political unrest in Germany. Wertheim Spain changed its name to “Rapida’ and became the sole manufacturer of the former German machines. The factory was managed by Karl Wertheim who changed his name to Carlos Vallin.

It was hard to find the complete serial number on the Museum’s Wertheim but the first numbers were legible as S5. S6 signified it was the top of the range.

An interesting fact was that some  of the family found their way to  Australia and set about building a business there, increasing their range of products to include pianos and other musical  instruments. The company still exists today in Melbourne and it is highly likely the Museum’s machine came from Australia. This machine is highly decorated with gold lettering on black. It was fun to imagine what might have been sewn on this cumbersome but elegant machine. No doubt somebody’s pride and joy in its day. The donor is not known but it was brought to the Museum prior to 1982.