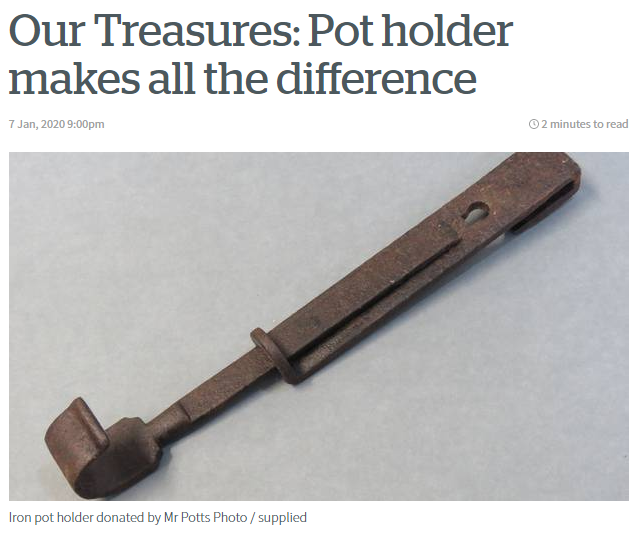 Over the festive season many of us find ourselves spending endless amounts of time in the kitchen whipping up copious amounts of food for consumption within a rather short period. I bet all sorts of gadgets were employed to whip, grate, slice and mix in kitchens throughout the country, but surely none would have used the little iron tool pictured here. Colonial women throughout New Zealand armed their kitchens with what was readily available and affordable, often being out of date back in Victorian England. The small pot hanger is one of the many historic household and kitchen tools that are not commonly found today. Others include pudding boilers, cake breakers, butter moulds, iron trivets, idlebacks (kettle tilters), potato racks and bellows. Pot holders were, can you guess, for holding pots and necessary for cooking over the fire. They belong to a more specific groups of tools for cooking in kitchen hearths or open fires, particularly useful for life country homes and bush camps, where the fire was for both heating and cooking.

A pot holder in Whangarei Museum’s collection was donated by (can you believe?) Mr. L. Potts of Whangarei in the 1960s. Little is known about how Mr. Potts came to have this item but it appears to date to the mid-19th century. The flat iron head is bent over and would have suspended from a wooden chimney beam joined into the masonry around the hearth. Earlier examples have saw-like lengths which were slung into the upper looped attachment which hung from the hearth beam, thus making the height adjustable by setting the wire hearth hook into the upper or lower ‘saw teeth’. Our example is more modern, composed of two flat iron pieces and a sliding mechanism for adjusting the height. A chimney or pot crane could also have been used, particularly for larger fireplaces. These consisted of iron brackets, often ornate, to suspend the pot holder from.

Household cooking changed in New Zealand with the import of cast iron ranges from overseas, successful in the 1870s, followed by gas stoves in the 1920s. Casting back nearly two hundred years one can imagine a family cooking their Christmas dinner around the fire in rural Northland with just such a pot hanger, a very different experience to the electric hobs most of us have nowadays.