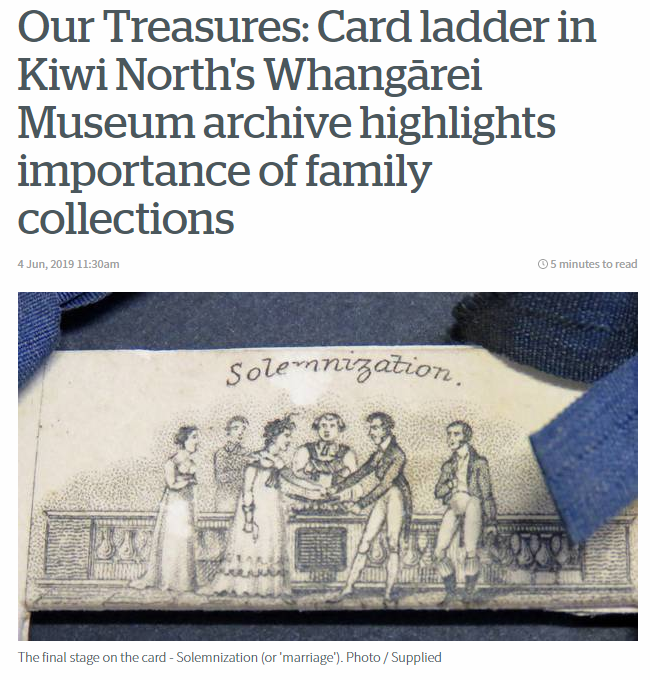 A community Archives is a magical place. Kiwi North’s Archive is one of several storerooms housing our diverse collection. The room is carefully stacked with an abundance of documents, artworks and photographs, also tapa cloths and Māori textiles. A large component of museum work involves preventative conservation- methods which maintain the integrity of artefacts and prevent the future need for conservation work. Due to the fragile nature of archives, generally identified as ‘works on paper’, we carefully control the internal light, temperature and relative humidity of this room.

Like museums around the world, Whangarei Museum’s Archives contains items which we know little about; such is the state of caring for layers upon layers of history. One such item is a fascinating card ladder, printed with small caricatures (Whangarei Museum catalogue number 1968/99/74). The quirky character of the illustrations and unknown use of the card itself demanded to be researched. The item consists of two back to back cards cut into a ladder shape and bound with black ribbons at the top. As part of the Holmes family collection, the card was donated by Miss A. Holmes in 1969.

Lucky for us, the manufacturers’ names were also printed:  “Cruikshanks.de. Roberts. sc.”, “London Published by R. Miller 25 Old Fish St St Pauls”. The Cruikshanks were a family of famous London illustrators. Isaac Cruikshank moved from Edinburgh to London in the late 1700s and produced many illustrations for public newsletters commenting on social and political events. He was also one of several pioneers of the cartoon style. His sons Isaac (b. 1789) and George (b. 1792) followed in his footsteps.

Older brother Isaac Robert Cruikshank had a colourful and rather unfortunate life. While he published illustrated plates in several novels and in collaboration with his brother, he was never as successful or famous as George, who published illustrations for the 1823 ‘Grimms’ Fairy Tales’ and several Charles Dickens novels.

The brothers developed their own styles but both focused on producing caricatures full of socio-political satyr, often highlighting the vulgarities of the upper class in Regency era Britain. 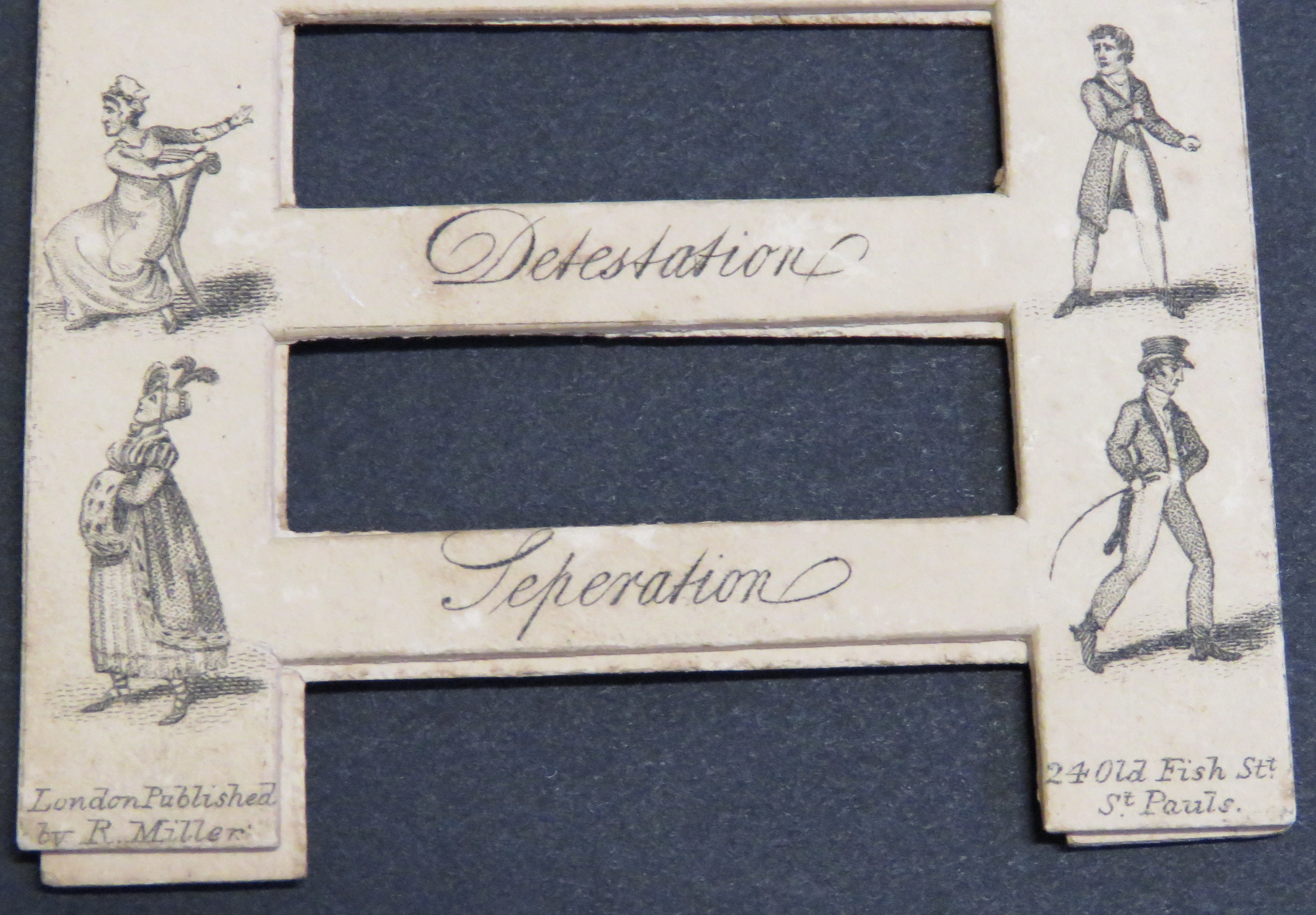 Many of these were fuelled by French political uprisings and changes in British monarchy. This subject is key to the origins of our card ladder. At the turn of the nineteenth century an interesting and entertaining drama began with the marriage of Prince George IV to his cousin Caroline Elisabeth of Brunswick, Germany in 1795. Both were unhappy with the marriage and George was infamous for his extravagance and mistresses. The couple separated soon after having their first and only child. Years of scandal, probably both real and just as rumour, followed. George attempted to divorce Caroline before his coronation as King based on evidence of adultery, however these claims were not accepted in court. Media spread among the tumultuous masses and for a time idealised Caroline as a victimised mother, wronged by the patriarchy. Just as she returned to London from self-exile for George’s coronation, Caroline fell ill and died in 1821. Their relationship was wrought by gossip and was the most publicised unhappy marriage of the time, giving press and pamphlet illustrators much to comment on. Some illustrators sided with Caroline, appealing to the public’s sympathies, while others depicted both characters as equally harsh players in the demise of their marriage.

A significant satire of these events was illustrated by George Cruikshank and published by William Hone in 1820, called “The Queens Matrimonial Ladder”.  Dr Susannah Walker, Department for Prints and Drawings Curator at the British Museum, shared information with us regarding these original documents. They can be viewed at the British Museum’s online catalogue under 1865,1111.417-435 and 1901,0706.8 although not all have been photographed. This publication included a political pamphlet with verse highlighting the “Queen’s” or Caroline’s trial. A card toy ladder- the literal Matrimonial Ladder-with images and subtitles complimenting the pamphlet was sold with the pamphlet for one shilling. This production was greatly popular and sold widely throughout the country. It is unknown where the ladder concept originated; perhaps it was a metaphor already used in songs. Later, novelty items were printed based on this Matrimonial Ladder, including Kiwi North’s example. However, these later publications fall under a more general social commentary, mocking marriage and married couples.

Interestingly the British Museum also holds a nearly identical print to Kiwi North’s ladder (1901,0706.8). It too was illustrated by George Cruikshank, printed by Edward John Roberts and published by R. Miller of London, but is only single sided and instead of cut outs, has illustrations of different fish up the centre. Perhaps this version is an ode to the saying “there are many fish in the sea” or was more controversial, alluding to the Christian symbol of a fish. It appears that this was a draft which did not make George and his printer Roberts’ final cut for publication. The classic Cruikshank caricatures at once offer entertainment and hilarity but upon further thought are an insight into the more frustrating behaviours of people, regardless of the time. It is reinvigorating to re-discover such a little treasure in Whangarei Museum’s Archive. This card highlights the importance of family collections and the preservation of items from the past that can entertain, delight, educate and inspire us today.