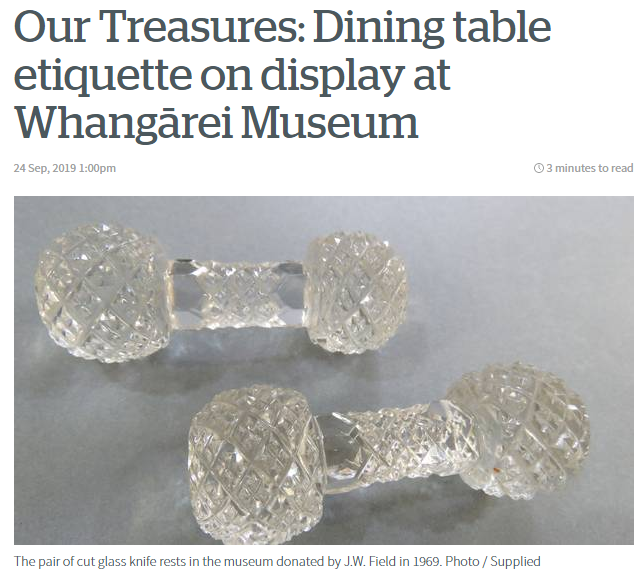 The Museum holds many examples of the correct and appropriate utensils designed for use on the table particularly in Victorian times. It seems that those ingenious Victorians imagined, manufactured and used a wide variety of items no longer found in modern dining rooms.

Knife rests are an example of the correct etiquette for dining. The earliest knife rests are believed to have emerged in the late 1700”s. Their purpose was to rest the blade of the carving knife clear of the tablecloth when the meat was carved at the table generally by the man of the house. It  must  have  been  a boon for the maids of the household whose  task it was to wash , starch  and  iron  the white  tablecloths of the time . A further rest was added to the table to support the carving fork.

Early rests were often made of tin glazed earthenware, wood, pottery and Sheffield silver plate. In the 1800’s rests for individual users became fashionable, allowing diners to use only a single knife for a multiplicity of courses without the tablecloth becoming soiled. Glass and later cut glass and crystal glass as in the photograph, gradually entered the market in the late 1800’s.

The styles became more elaborate and there were a wide variety of materials used including silver, ebony, ivory, metal combinations, pewter, porcelain, horn and combinations of silver and glass and silver and ivory to name just a few. The Museum holds a pair of cut glass rests (see photo) in the bar bell style donated by J.W. Field in 1969.

A very popular style was the jack, a circular ball, usually of silver plate with six arms, each arm with a smaller silver ball on the ends. The arms measuring approximately five centimetres in length.

In the 1900’s styles became even more diverse and boxed sets for individual use were common. A boxed pair in silver made a useful wedding present.

Rests were in use throughout Europe and America and are still being produced today particularly in America, usually as an addition to a dinner set or canteen of cutlery. It is interesting to note that the Chinese use rests for their chopsticks, a practice going back centuries.

Gradually the general use of rests has declined as meat was no longer carved at table except on special occasions and place mats have replaced tablecloths in many instances. Rests can be now be found in Antique and Collectible shops with prices ranging from a few dollars through to several hundred especially for boxed sets. For those just beginning their antique collecting hobby, rests make the ideal place to start a collection.