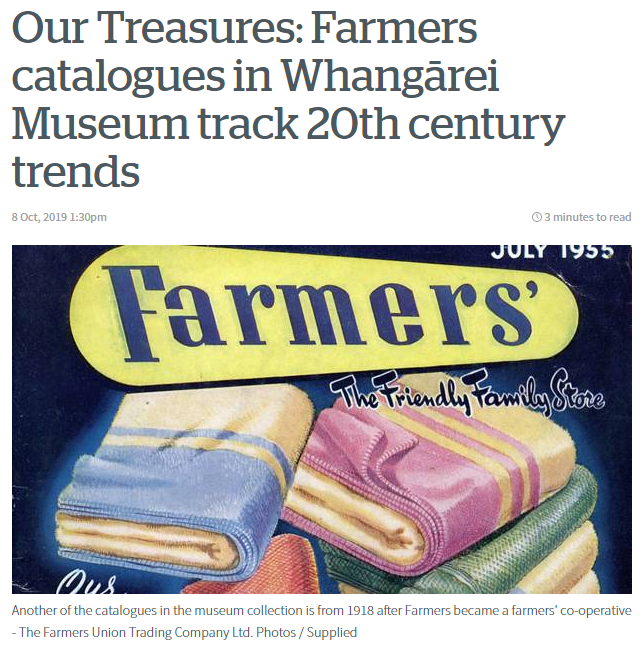 Trading for over a century and still going strong, Farmers has an interesting history as one of New Zealand’s iconic and long standing department stores. With beginnings in 1909 as “Laidlaw Leeds”, Farmers Trading Company underwent several transformations and regular periods of growth to become the well-known nationwide store it is today. In Whangarei Museum we have several Farmers catalogues that can help us to trace the development of this company over time. They are also fantastic primary resources tracking the fashions and technology available to New Zealanders over the 20th century. One of our catalogues is a copy of the first ever catalogue produced in 1909-1910 by the company and shows the original branding of “Laidlaw, Leeds & Co.” advertising “Stern Old-Fashioned Unfailing Honesty” (Kiwi North 1991/55/53). Such catalogues were a method of advertising a mail order service from their Auckland warehouse to shops and households throughout the country.

Another of our catalogues is from 1918 after Famers had become a farmers’ cooperative - The Farmers Union Trading Company Ltd. (Kiwi North 1991/55/50). Its pages offer allsorts from horse harnesses and garden cultivators to canned fish, bedroom drawers and woollen underwear. At this time large scale ready-made clothing was still in its infancy but was steadily developing to meet a growing middle class market, assisted by new technologies birthed in the late 19th century industrial boom of America. Fashion was now moving away from custom made garments either made at a professional tailors, or at home for those who could not afford a tailor and seamstress, towards pre-made garments which in rare cases could be purchased, taken home and instantly worn.

The challenge here was that a standardised sizing system meant that ready-made garments in the early 1900s  were either made leaving one seam unfinished to be sewn at home or had to undergo several adjustments at home to get the right fit. America was way ahead of Britain in the sizing of ready to wear and it is likely that much of the product on offer in our Farmers catalogue was imported from there. It was not until the late 1920s-1930s that the UK caught up with America in sizing clothing, much owing to the import of American specialists and machines.

The appeal of mail order merchants was particularly felt in Whangarei and other locations of rural New Zealand who could not readily access big city shopping. Once an order was placed the goods were shipped from Auckland to a large number of ports around the country, and often then connecting inland by rail. Freight from Auckland went by steamer to Whangarei Railway Wharf, costing ₤17 per ton (which equates to around $2000 per 1,000 kg in today’s metrics), with a cheaper route via Opua. This method of buying is similar to our online shopping today but precludes it by 170 years; the first catalogue published by Tiffany & Co. in 1845. Other catalogues from 1938, 1951 and 1955 show the continuation of this sales method throughout the mid-1900s, but evidently the fashions are very different. Flicking through the pages of these catalogues you can visualise what the homes of New Zealanders were filled with and how their fashions and needs changed, highlighting what a valuable resource such archives can be.