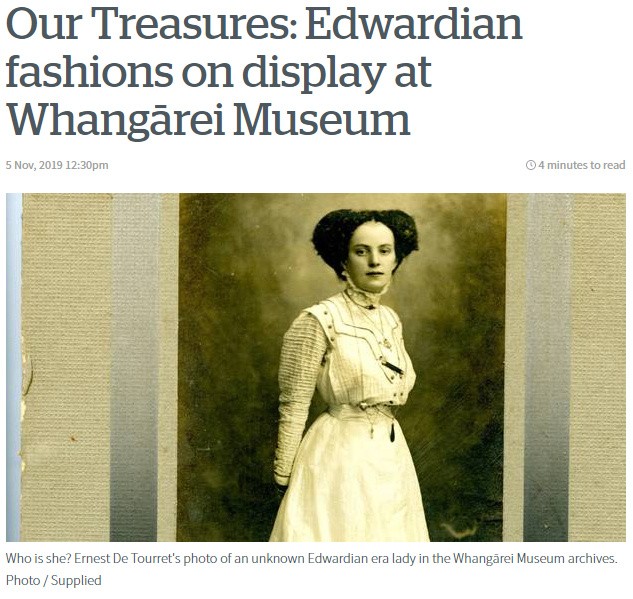 Whangarei city is lucky to have been home to many talented and prolific photographers throughout its history, such as Ernest De Tourrett, George Woolley, Adele Younghusband, and Joseph Cowdell. Many of their photographs are cared for by Whangarei Museum, treasured as records of local businesses, photographic developments, local art and business, the landscape and of course people of the times. One such photo was donated to Whangarei Museum as part of a large collection by Whangarei resident Olga Englund.

Unfortunately we do not know the identity of the glamorous woman photographed, hopefully our readers can assist here. Nevertheless, the photo holds worth as a record of the stunning (I guess subjective) fashions of the Edwardian era in Whangarei and the work of local studio photographer Ernest De Tourret. His monogram is embossed in the bottom corner of the photo’s matt frame and, in addition to the fashion of the lady, assists in dating the photo.

De Tourret was in business in Cameron Street from 1907/8, continuing on James Street until 1917 and produced personal portraits as well as his more widely known scenery postcards. An Edwardian silhouette and jewellery help refine the date range to before 1910 as it is unlikely such a young fashionable lady would continue wearing this ‘S’ shaped silhouette beyond this era but would instead have been sporting the squarer silhouette of the 1910s, think the Titanic era.

The quality of portraiture at this time never ceases to amaze and De Tourret’s photo allows us to see details of dressmaking, hair and jewellery. Her hair is not wrapped in a Tudor headdress or ‘ramshorn’ as it first appears, but the effect certainly mimics a medieval headdress and highlights the Edwardian fascination with mimicking supposed romantic historical periods. Up close, her plaits are visible, likely wrapped over padded domes, which were possibly made from collected bunches of her own hair, at either side of a central part.

Jewellery was a huge part of the European Edwardian look, promoted by the wealthy aristocratic classes. Forms were ethereal and fluid, referencing flora and motifs of the 18th century French court like the sun. Garlands, ribbons, balls and hearts added to the ornate designs, often in fine silver or platinum, augmented by rich coloured stones. The lady in our photo is wearing several fine and long silver chains and black onyx pendants with heart and droplet shapes. Long chains and tassels were popular for ornamenting around the pouched blouse and following the light-hearted flowing lines of the era.

Her patterned and frilled lace collar reaches high up her neck, the effect achieved by stiffening the lace with wire or bone supports. Her silhouette, as before mentioned is an elegant ‘S’ shape made by a specially crafted corset, several layers of petticoats at the hips, and a blouse with a pouched front waist, which could be augmented by a frilly chemise beneath. Victorian and Edwardian blouses were detailed and complicated confections of lace, tucks, frills and embroidery. The blouse photographed was probably made from cotton lawn which has been pintucked creating the fine lines and inserted with machined lace panels. It is likely that the pintucks on the body were machine made as factories could sew up to 7 parallel rows at this time, but the sleeved were possibly hand sewn. Sleeves of this period were often so ornamental that they were sewn in a separate department and added to the final blouse at the end.

Fashion in the early 1900s was dictated by the wealthy and primarily created by favoured dressmakers in Paris, and Britain to a lesser extent. The fashionable circles travelled to Paris regularly to see the latest designs which were taken direct as ‘models’ to be copied by smaller scale dressmakers around the UK. Clothing was cut, prepared and sewn by hand and hand machine and ‘sizes’ as we know them were not yet a concept. Cheaper clothing produced on a larger scale available through dressmaker’s stores, newly emerging department stores and by mail order had seams left unfinished expecting the final sizing and sewing to be completed at home. Our young lady was clearly influenced by on trend international fashions and this photo reveals how far these influences reached, even to the dressmakers of Whangarei and of course the hub of Auckland.