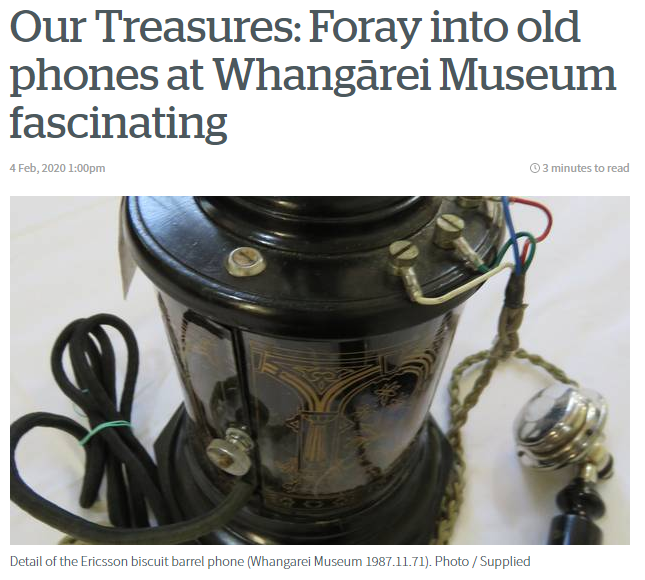 I was lucky enough to spend Christmas with my son and his family in sunny Queensland. My 11 year old twin grandchildren were the happy recipients of the latest in smart phones. They had no trouble in getting into the swing of things and this set me thinking about the speed of advances in distance communication from early smoke signals or drums to town criers, letters and newspapers etc. The list goes on. Everyone knows that Alexander Graham Bell invented the telephone in 1874. Researching for this article, I found in fact as early as 1840 there were attempts to develop the transmission of sound and voice. Throughout the next forty years many advances were made, including those by Thomas Edison, who in 1873 built a rheostat to test the principle of varying resistance in carbon grains due to pressure. His initial experiment failed but however he persevered.

The Museum holds a number of very interesting telephones in its Collections There are two of especial interest. The “skeleton “phone 1884 – 1892(presently on display in the Museum main hall) called this because its inside workings are able to be seen. This phone was personally designed by Lars Magnus Ericsson who never called it the skeleton preferring the names Eiffel Tower, so called by the purists .It is perhaps one of the world’s most original and now one of the most coveted standard telephones especially by collectors.

A desk phone of steel construction with two black lacquered induction magnets turned and twisted into a stand fitted with a horizontal handpiece, which led to the more modern land line phone receivers being laid horizontally. This phone was found amazingly in the dirt beneath the former Regent Theatre in Kensington in 1953 by L. and M. Montgomery who had the phone restored by Owen Davies, a telephone enthusiast from Auckland.

The other phone featured is known as the “Biscuit barrel” also an Ericsson model, from about 1894. A sought after phone by collectors and now very rare, though reproductions are widely available for sale on the Internet. This phone was built into a steel cylinder and decorated in mute green and gold and designed for a desk or for table use. The wooden top and base were finished in black japan. It has two small magnet generators and was only useful as an extension phone. The production figures were extremely small, but even so it managed to stay in production (at least in the catalogue) between 1893 and 1911. This model was part of an extensive collection made by the  late Owen  Davies of Auckland, a cabinet make by trade was well known for the many  amazing restorations of old phones.

This foray into old phones proved to be a very interesting journey. The mobiles that my grandchildren are now the proud owners of would have astounded Bell and Edison. The advances in miniaturization and the wide range of capabilities of modern phones in a relatively short period of time is nothing short   of amazing. Progress – what next !!!