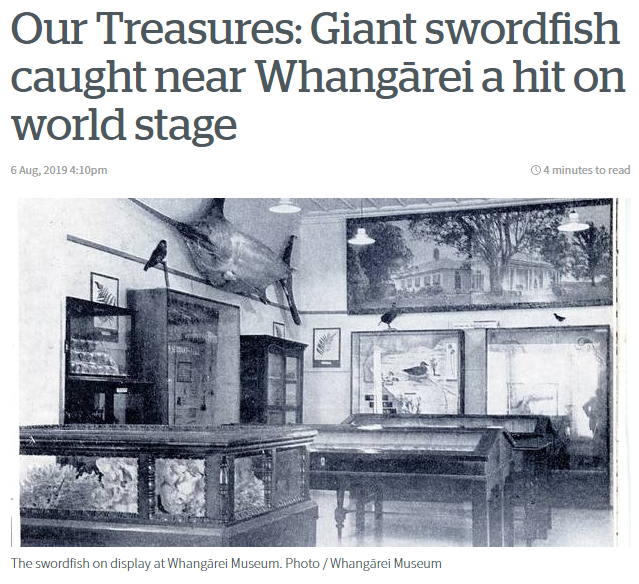 On a recent excursion to Whangarei Museum at Kiwi North, one of the visitors, aged 92, recalled visiting the city’s museum when it was housed in the Municipal Building on Bank Street, and another remembered seeing the exhibits later on when the Museum was accommodated in an old homestead in Cafler Ave.

This piqued the curiosity of staff eager to find out what was on display back then and what these exhibits looked like.  Unfortunately, only a couple of photographs from this period in the Museum’s history have survived which provide a glimpse back in time to the earlier museum’s interior.

Immediately obvious are the beautifully crafted cabinets used to exhibit artefacts as well as an enormous swordfish mounted proudly on the wall above.  Although many of the items in the images can be identified as those now held in the Whangarei Museum, the large fish was not one of them.

It turned out that the swordfish on display had a long and eventful history, not only with the Museum but on the international stage.  At the time of its capture it made headlines and continued to do so for a variety of reasons over the course of its existence.

Mr Bernard Osborne of the Public Works Department at Whangarei, became somewhat of a celebrity after catching the mammoth broadbill swordfish at the Nook, Parua Bay in 1923 from his dinghy.  After its capture, the billfish was towed to the town wharf where it was hung by Harbour Board staff in their waterfront yard creating much excitement amongst anglers and the public.

Weighing a colossal 560lb, with a length of 13ft 4ins, the fish was identified as being of a rarer variety (Xiphias gladius).   The broadbill was subsequently sent to a taxidermist to be preserved and mounted as an acquisition to the Municipal Museum’s collection at the Town Hall.

The recent addition, added considerable interest to the museum exhibits and it wasn’t long before its presence was requested further south.  In 1926 the sizeable fish was transported to Dunedin, featuring in the New Zealand and South Seas International Exhibition which ran for six months.

Classed as the largest specimen of a true broadbill swordfish, the catch from Northland gained quite a reputation.  So much so, that a few months later it was destined for a much larger audience.  This time being shipped to Toronto for the opening of the Canadian National Exhibition which had a reputation as being the largest fair in the world.  The NZ Government saw such exhibitions as ‘gigantic illustrated advertisments’.

It was here in the International Pavilion that the ‘outstanding exhibit’, loaned by the Whangarei Borough Council, received most acclaim receiving due acknowledgement by winning a silver medal.  Those who visited the NZ Court claimed it the most interesting display of the whole exhibition.

By 1937 the swordfish had deteriorated after developing borer.  It was found that the modelled fish had not been reproduced appropriately, the skin being composed of paper and cloth over a wooden frame and stuffed with wood-wool.  Consequently, it was sent to Auckland Museum’s taxidermist to be refashioned.  As the original carcase had ceased to exist, a fish caught in Tauranga was used to reproduce a plaster cast of the body.  After being painted and with the original sword re-fitted, it was deemed a realistic likeness.

Hitting the headlines again on its return to Whangarei, the reconstructed fish was re-hung in the old library where the public continued to be amazed at the spectacle.

By the 1970’s the swordfish that was exposed to millions, a remnant of its former self, fell into obscurity.  The certificate awarded in Toronto and the Museum photographs are all that remains of a once famous Northland behemoth.