Northland, with Whangarei at its heart, was named the “Garden of Auckland” in the mid-late 1800s and went on to become New Zealand’s largest fruit producing region at the turn of the century.

A century back, the fruit growing industry was just as risky as it can be now. In 1918, strong weather and fruit disease hit Whangarei growers. Local peaches were particularly ruined by the rain as well as a subsequent invasion of ‘brown rot’, which was likely spread by reusing infected fruit cases from other districts. At this time, most growers were supplying auctioneers in Auckland, so a slump in production here was felt by city dwellers to the south. K. R. Macdonald, a local orchardist, reported that the effects of bad weather and disease were felt more strongly by growers as fewer were preserving their own fruits and had trouble finding “cooperative” canning  companies (6 February 1918, Northern Advocate). Mr Reyburn, who resided in the Town Basin, suggested that growers begin focusing on canned goods to reduce the amount of food that was being wasted when the fruit ripened and was picked all at once.

One company that was then in the business of canning foods locally was Clark Bros. Ltd. Fresh fruits were grown in their orchard on Maunu Road and canned in their factory, although the location of said factory is unknown but likely to have been on the same property. Interestingly, a small shed on this orchard served as a training ground for Whangarei boxer Reg. Trowern, who became famous in New Zealand in the 1930s. In the early 1900s, Clarke Bros. were listed as growing pears, peaches, apples, and glasshouse grapes and it is evident that they also grew other products suitable for canning, such as tomatoes. A notice in the Northern Advocate, 25th January 1911, reported that Clarke Bros. gave the Advocate “some splendid specimens of outdoor tomatoes, uniform of contour, of fine size, entirely free from blemish or disease, and luscious in flavour”. 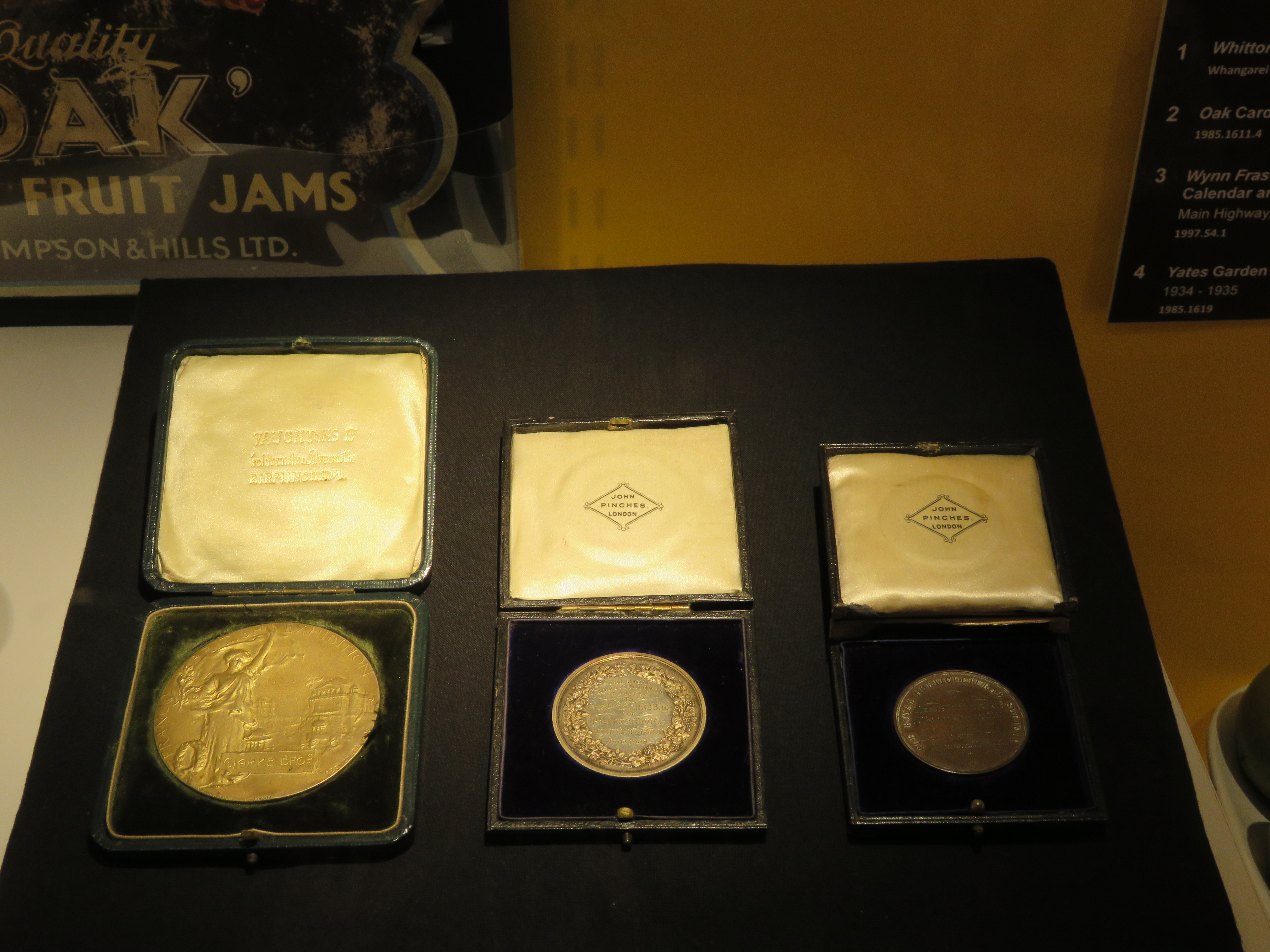 Three medals won by Clarke Bros. at the 1908 Franco-British Exhibition were donated by the company to Whangārei Museum in the 1980s. Photo / Supplied

Clarke Bros. preserves were clearly of high quality as they won awards in nation competitions, such as the Auckland Winter Show, and international competitions, such as the American St. Louis Exposition and the London Franco-British Exhibition. Three medals won by Clarke Bros. at the 1908 Franco-British Exhibition were donated by the company to Whangarei Museum in the 1980s (Whangarei Museum 1982.5.1, 2, 3). The Franco-British Exhibition was a world fair to display products of Science, Arts, and Industry from French and British colonies across the globe. Over 8 million people visited the White City which was a massive complex of white stone buildings designed especially for the event, featuring a lagoon, gardens, and a large fair ground-like ‘flip flap’. The New Zealand Court included displays focusing on the fur, meat, wool, and dairy industries, but also included produce. Unfortunately the complex was gradually demolished for modern development.

Certificates of merit gained for tinned and bottled fruit at a 1914 Auckland Exhibition were also displayed at Drummond’s shop on Cameron Street in town. Soon after, the loss of men with useful skills to fight overseas in World War One was felt all over the country, especially in food production plants such as canning factories.

We still are not sure exactly who the Clarke brothers were, as Clarke is a common name and crops up all throughout Northland’s history as farmers, furnishers, and even as dental surgeons in Whangarei. At least one of the orchardist Clarke brothers was a member of the Whangarei Fruitgrowers Association and is listed as A. E. Clarke. Five others are listed with initials B., I., J., M., and W. in a team with the Rawnsley brothers against the Meat Supply Co. and Frodshams grocers in a 1910 trade company cricket match in “North’s paddock”. Any information that would throw light into the identity of the fruit growing Clarke brothers and their canning factory would be most appreciated. Details like these will help to build an in depth context to three special artefacts in Whangarei Museum and can assist further research into family histories, Whangarei industries and the development of our region.