I spied this beautiful and ornate sewing box in one of the storerooms at the Whangārei Museum. Surely there was a wonderful story behind it? I was not disappointed as I researched this rare item. 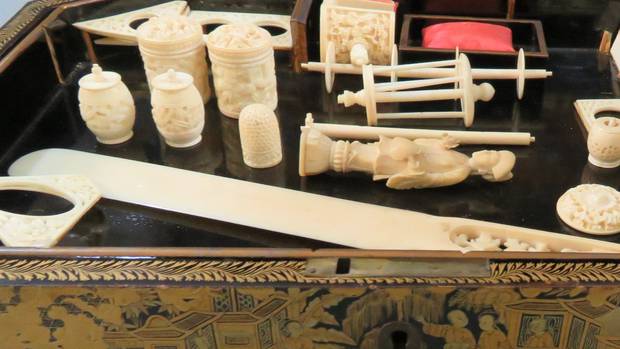 This Chinese sewing box is currently on display and can be viewed in the museum's main gallery. Kiwi North is open daily 10am to 4pm.

This box was made in China in the early 19th century. It would have taken many hours of artistry to draw and process the elaborate details depicted on the lid and sides of this box.

Scenes of life in China such as flowers, trees, houses, and people complement the curved octagonal form.

The box sits on gilded bat feet, there are gilded handles and hinges as well. Inside the box there is a lift out tray with supplementary lids and sewing tools made of turned and carved ivory. A drawer in the base contains materials for painting on silk.

As an aside, the same sewing box was found in the home of Jane Austen, which is now a museum. These boxes were imported to England at a time when Chinese arts were very fashionable and keenly sought after. 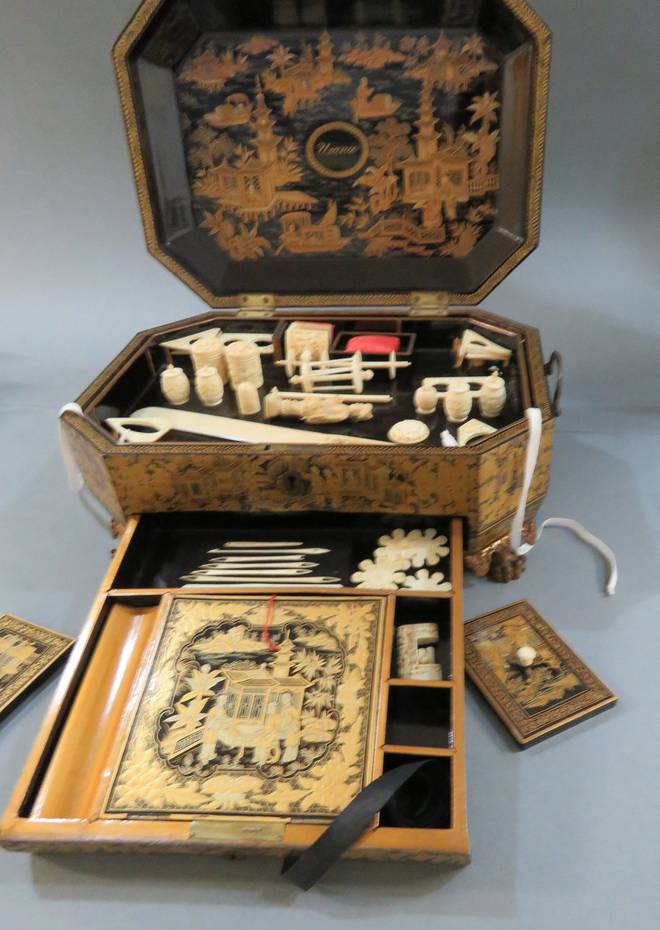 The box came to the museum through a bequest from Mrs Nell Bedlington, granddaughter of Eugene Cafler and his second wife Harriet.

Two hundred years later not many examples remain as time and use have rubbed away much of the decoration, and the tiny ivory pieces such as cotton reels and needle cases have been lost.

Whangārei Museum is lucky to have this fine example with almost all the sewing equipment still intact. The box came to the museum through a bequest from Nell Bedlington, granddaughter of Eugene Cafler and his second wife Harriet.

The finish on this box is known as export lacquer. Lacquer decoration was revered in China as one of the great arts. Early 19th century was the golden period for Chinese lacquer boxes.

Merchants associated with the East India Company saw money making opportunities with the sale of such boxes to the English market to satisfy the demand from increasingly prosperous people at home.

The connection this particular box has to Whangārei is that it belonged to Madame Uranie Diore Cafler (1812-1866), the first wife of Edouard Eugene Cafler.

Uranie's name is inscribed inside the lid in gold lettering. Cafler built a home, known as "Sans Souci" loosely translating to 'No worries', where the Town Basin now stands.

Old photos show the house of 12 rooms was very impressive with beautiful grounds and gardens and numerous outbuildings.

The Caflers were of French origin. Edouard was born in 1798, the youngest of 13. His father was the founder of the beet sugar industry in Europe.

The young Edouard went on to serve in the ambulance corps at the Battle of Waterloo. With considerable foresight as a merchant he eventually settled in Whangārei around 1840, where he established a hotel, a store, and a Post Office. His influence can still be seen in Whangārei today, such as Cafler Park.

Uranie's sewing box is one of Whangārei Museum's treasures; if it could only speak and tell us about the French woman who came to live on the other side of the world in what must have seemed a wild and savage land.

This beautiful piece is currently on display and can be viewed in the museum's main gallery. Kiwi North is open daily 10am to 4pm.

Volunteer at the Whangārei Museum.