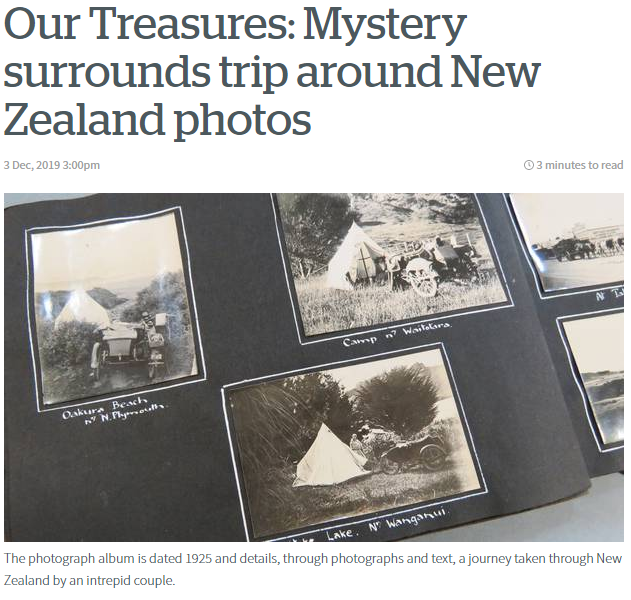 This interesting photograph album came to the Whangarei Museum in a box with other donations. Nothing is known about the album’s origins, other than it is dated 1925 and it details through photographs and text, a journey taken through New Zealand by an intrepid couple on a 7/9 Harley motorbike and sidecar. The photos are well mounted and identified as to location but no mention of who this adventurous couple might be. Maps are included to show stopping places and a neatly typed diary records places visited and road and weather conditions.

Here is an excerpt: “Dec 30th left after an abortive attempt on the 29th, owing to bad weather. Showery on departure, but were fortunate in missing heavy showers. Sharp shower at Mercer. Road to here full of pot holes. First part of Rangiriri rough but easily negotiated, latter part of about 1/2 mile being very soft and greasy. Had to use ropes and halt twice to scrape out mudguards. Several cars in difficulties. Lunch close to Taupiri, arriving Hamilton about 4.30. Heavy rain caused a halt 8 miles from Hamilton. Camp under pine trees, beside road.”

A summary at the end of the diary noted that the entire trip took  33 days – distance by road 2236 miles – petrol consumption 38 mpg, cost of petrol 9 pounds 17 shillings and sixpence. A bargain by today’s standards.

Many mechanical faults dogged the couple on the trip. Problems with the clutch, tyres blowing etc. A 7 foot by 7 foot tent was used for camping. Such hardy souls!

In a concluding statement the writer notes “The people generally were most kind and  helpful especially those connected with the “SS Earnslaw” on Lake Wakatipu, but the railway officials connected with  the Springfield – Arthurs Pass section of the West Coast Railway, appeared to  think  they were doing us a favour by allowing us to  travel at all.  We were given no assistance in loading a very heavy machine into the guards van.  At Arthurs Pass Station, a worse position arose. Here the train crew left us to unload the outfit . The cycle alone weighed 400 lbs”

We would love to solve the mystery of who these people were. In the diary there is mention of friends they stayed with along the way, a Bett Hewitt at Marton, Mrs Templar at Sumner, the Steeles at Hoon Hay and the Emersons at Andersons  Bay. Another clue may lie in one of the photos showing a barge crossing the Northern Wairoa River carrying the motorcycle and sidecar. The actual trip was from Auckland to the South and returning to Auckland, so the travellers may well have been from the Dargaville area.

Hopefully there are descendants out there who may be able to identify the couple. We at the Museum would be delighted to hear from you. Please contact either Natalie or Alison between 10.00 am and 4 pm at Kiwi North 094389630 or natalie@kiwinorth.co.nz