Pharmacy and pharmaceuticals have been in use since ancient times. Herbalists, apothecaries, chemists, and tohunga of rongoā Māori are variations of pharmacists. A formal qualification of pharmacy in America and Britain began in the early 1800s. At the time, many pharmacists, both qualified and unqualified, arrived amongst new migrants to New Zealand eagerly seeking to set up successful businesses. Fortunately for said pharmacists and unfortunately for their patrons, the drugs sold at chemists were not regulated until after 1880. Greater regulation may have reduced the prevalence of charlatans who produced amateur or fraudulent medicines with false advertising. Despite tighter regulation, there were always newly patented medicines of varying quality arriving from overseas.

One well-known brand of medicines from America was De Witt’s. Starting out as a small homemade project in Illinois, U.S.A., E.C. DeWitt and Co. expanded to the U.K. in 1888 and then on to Australia and New Zealand in the 1900s. As seen in an example of DeWitt products in Whangarei Museum’s Collection, DeWitt medicines were first retailed through individual importers but eventually became centralised in a franchise and were even made here by local agents. These included Newson & Co, Wellington, and Frank Stevens Laboratories, Auckland.

Our example was recently donated to the Museum by C. McEvoy. It is a small, glass bottle of DeWitt’s Pills contained in a cardboard box, both beautifully labelled in blue and gold with DeWitt’s iconic American sunrays splaying out from between two mountains. The pills are DeWitt’s famous diuretic treatment for kidneys and bladder. Bottles like this one were sold to adults and older children with back ache and muscle pain from kidney and urinary problems, from the 1920s to 1970s. One would hope the ingredients were improved over this long time span.

The most interesting backstory emerges once you start researching Elden DeWitt, more juicy than anything our little pill bottle could reveal. Elden DeWitt’s multi-million dollar fortune and various scandals were only realised by the public after his death in 1927. DeWitt’s ‘medical’ career started in his twenties, selling pharmaceutical products to small towns despite having no training. He expanded by joining with another druggist to become Biggs & DeWitt, however this didn’t last very long and DeWitt continued on his own. Despite authorities like the American Public Health Association being concerned over the legitimacy and safety of self-made druggists like DeWitt, their patented medicines boomed and businesses became household names. In fact a common ingredient in many of DeWitt’s products was alcohol; in 1916 some of his products were found to contain whiskey at up to 34%! DeWitt’s kidney pills were served over the counter in Australia and New Zealand until in 1987 the Church & Dwight soap company bought the brand out and took over its factories. Despite an entrepreneurial attitude, fantastical advertising and dubious ingredients, Elden DeWitt sold enough kidney pills to make a $300 million fortune and became a household name, one immortalised in this little bottle. 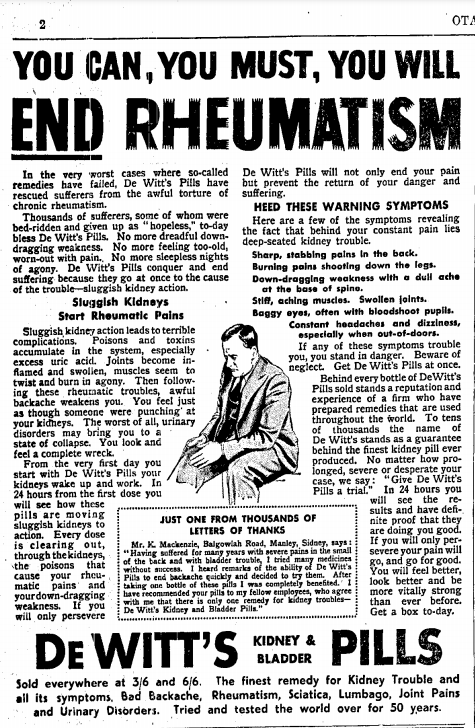