Heritage Park
/
History of our Buildings
/
Glorat, the Home
/

The Homestead: A Rare Survival

Glorat, the Clarke Homestead was built for Alexander Clarke ( 1833-1892), Mary Clarke and their sons William, James and Alexander. Constructed in 1886 by Whangarei carpenter, Richard Keyte, the large villa probably followed the custom of the time of using the two most conspicuously detailed rooms in the front of the house as dining and drawing room. Originally the verandah ran right around the house. Three bedrooms ran along the north side and on the south side were Alexander Clarke’s surgery and waiting room. Behind that was a kitchen.

Later alterations formed one room from Clarke’s surgery, creating a living/dining space. Infilling of the rear verandah created four new service rooms, a maid’s bedrooom and scullery was created at the southwest corner of the verandah and its northwest corner was enclosed to create two rooms – a ‘Boys’ Room and Bathroom. 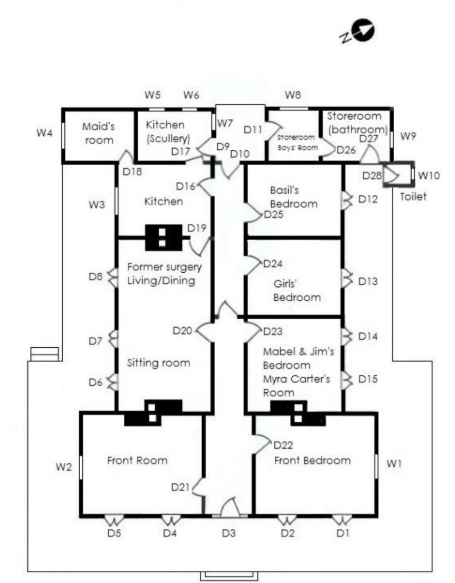 Good luck and providence ensured that relatively little change occurred in the house from the early 1900s to the time it entered museum ownership in 1973. As a result, the interior surfaces, shellacked or painted woodwork, wallpaper and decorative friezes, over-painted wallpaper and japanned and stained floors have come through to the 21st century largely unaltered but showing their use over time.

Most changes of use have fortunately been limited to what many describe as the ‘less significant’ rooms. The former scullery became a modern C20th kitchen; the former Boys’ room and bathroom were used as stores, one, significantly for storage of the varnished doors removed from rooms to provide space to install visitor viewing alcoves.

While three seemingly minor rooms have been removed from public view a usable kitchen for staff or functions use, and two spaces for storage have been gained. Future restoration of these spaces is still possible, provided sufficient documentary evidence exists to guide such an activity. This could lead to a more rounded interpretation covering both classes of occupants of Glorat.

Few house museums as old as Glorat have managed to survive being “improved” by 20th century historic building managers and volunteers (usually with the best of intentions) ‘tidying up’ rooms and rationalising collections, sanding floors, refinishing joinery and hanging hopefully old-looking but new wallpapers that they hoped would recapture the spirit of their aged predecessors.

Glorat is a very rare survival. It stands out as a house of 12 main spaces where, if the highly intrusive viewing alcoves were removed tomorrow, the presentation and interpretation of three-quarters of the house, as it has been seen since the Edwardian period, would make the house exceptional again.

To the Whangarei District and community, the homestead and its environs are significant and of consequence. Built in 1886 it is a 'statement' about one three-generation family in the Maunu area of the Whangarei District. We are fortunate that the family and museum collaborated in 1973 to retain this example of the past. The Clarke's story covers nearly ninety years of an immigrant family of Scottish and English origins emigrating in late Victorian times to rural, northern New Zealand.

The homestead itself is an artefact. Its story is a valid expression of a part of our local and national social history; its construction a part of our industrial history. It has a 'special character and significance unique to New Zealand and is a statement of past circumstances, a repository for memories, and a reminder of the continuity of life through the generations' (Cochran, 1980)

Clarke Homestead was registered by the New Zealand Historic Places Trust as a Category 2 Historic Place on 23 June 1983, Register Number 478. This category includes

“... places of historical or cultural heritage significance or value”

The site of Glorat is also a significant archaeological site. Such a site is defined by the Heritage New Zealand Pouhere Taonga Act 2014 as “a place associated with pre-1900 human activity, where there may be evidence relating to the history of New Zealand, and any site that meets this definition is afforded automatic statutory protection under the Act.”